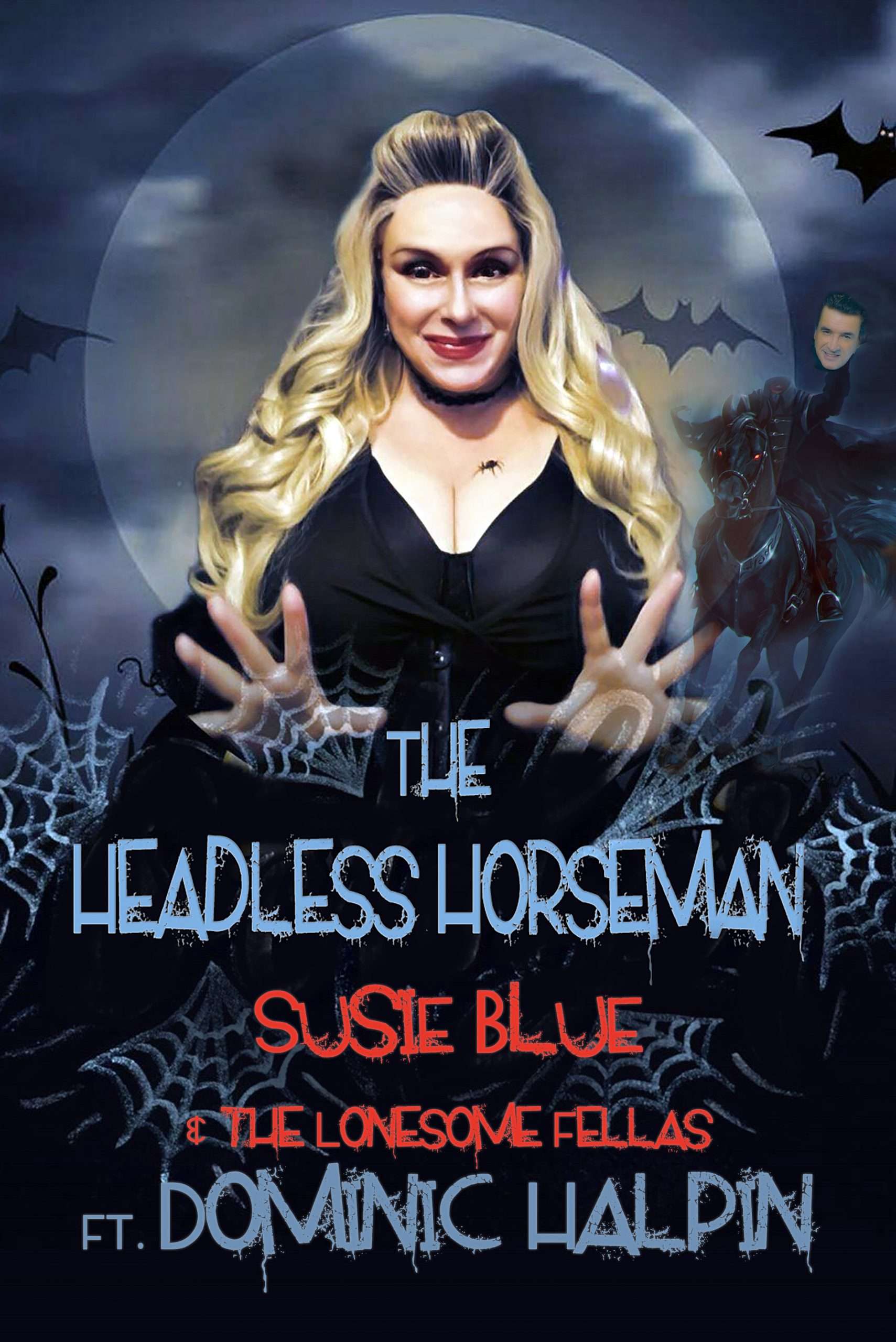 Are you ready for a spine chilling frolic this Halloween?  The Headless Horseman swings again!

I’ll bet you never thought of a swingin’ Headless Horseman, but Susie Blue has…. and she’s gathered an international assemblage of blues and swing musicians including UK Crooner Dominic Halpin to charm you with the ghostly adventures of the Headless Horseman!

“Now gather ’round while I elucidate
On what goes on when it gets late…
Long about midnight, the ghosts and banshees
Get together for their jamboree.

Ghosts are bad, but the one that’s cursed
Is the Headless Horseman, he’s the worst!

When he goes a-joggin’ ‘cross the land
Holdin’ his noggin right in his hand
Demons take one look and groan
And they hit the road for parts unknown!

The Headless Horseman appears in folklore from around the world since the Middle Ages and he is traditionally depicted as a man on horseback who is missing his head.    “The Legend of Sleepy Hollow,” is a short story written in 1820 by American Washington Irving,   and begins in Sleepy Hollow, New York, during the American Revolutionary War. Traditional folklore holds that the Horseman was a Hessian trooper who was killed during the Battle of White Plains in 1776. He was decapitated by an American cannonball and the shattered remains of his head were left on the battlefield while his comrades hastily carried his body away. He was buried in the cemetery of the Old Dutch Church of Sleepy Hollow, from which he rises as a malevolent ghost, furiously seeking his lost head and wielding a Jack-o’-Lantern as a temporary replacement and/or weapon. Modern versions of the story refer his rides to Halloween, around which time the battle took place.  Over the decades there have been several movies and cartoons retelling this favorite story, and some great songs were written about it too… One of the best known melodies was written for the the classic Disney movie “The Legend of Sleepy Hollow” by Don Raye and Gene DePaul in 1949 and sung by  popular Big Band singer Kay Starr who also recorded it that year with The Three Beaus, a singing trio with the Billy Butterfield Quintet. 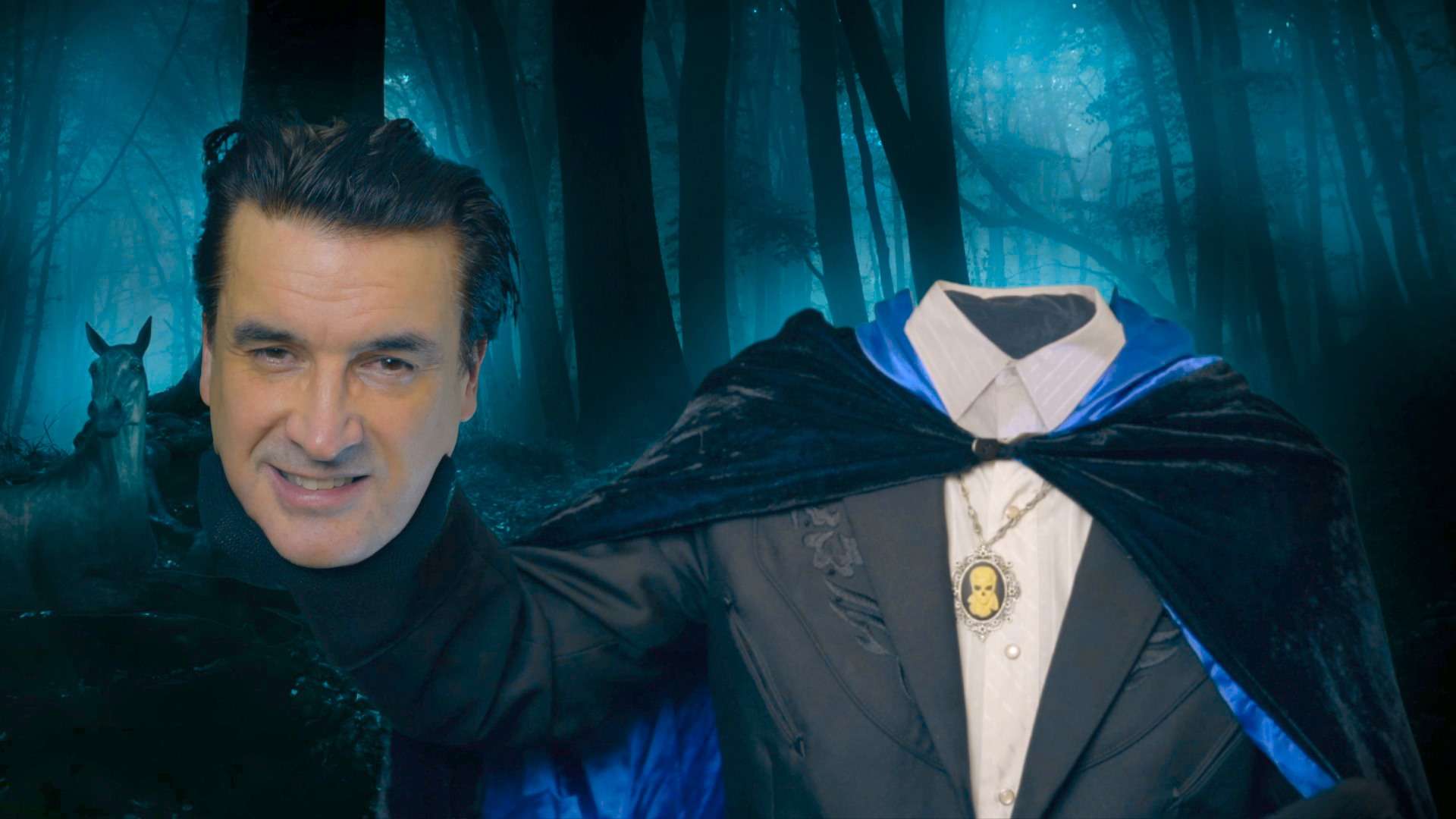 Chicago vocalist Solitaire Miles,  best known for her blues and roots persona Susie Blue, also worked as a jazz and swing vocalist for 20 years before starting her award winning band “The Lonesome Fellas” and she spent a lot of time listening to Starr.  “I have always loved this song and wanted to do something fun with it, and UK Singer  Dominic Halpin is my perfect partner in delictum.   He understands  my love for Swing  and mixes it up with Blues and a very mischievous sense of humor.”  Dominic Halpin, who sings in duet with Miles on this track,  is a full-time entertainer, songwriter/producer in the UK.    In addition to fronting his own Swing Band, Dominic Halpin & The Honey B’s, he also created a highly successful touring show “A Country Night In Nashville”.   Miles and Halpin have collaborated before with a very popular Everly Brothers tune “So Sad” which garnered international acclaim with DJ’s all over the world spinning the tune,  so the duo were eager to get together again,  albeit long distance, to  create another duet for Halloween.

Crooning this unique and lively Halloween ballad their voices blend together like honey and bourbon, stirred smoothly with the beguiling background vocals of Jen Zias who adds her luminous tones to this chilling retro canticle.  The band on this track is a stellar international assemblage, with Parisian Gypsy Jazz Guitarist Martin Gioanni writing the arrangement and playing rhythm, lead guitar and bass, and Chicago’s maestro Howard Levy on piano.  “Since the original Covid lockdown many musicians have been meeting and working online and it’s been an exciting time to meet and play with such talented people that you might not have ever bumped elbows with in your local club” Miles said of her band “And I think mixing us all up like this brings a real flair to the story of the Headless Horseman”

“This is the most irresistible retro Halloween Melody that I’ve ever heard, and Solitaire Miles and Dominic Halpin’s voices are crystal clear, reminding you of nostalgic duos like Perry Como and Rosemary Clooney.  This tune has sat dusty on the shelf since 1942 and they have brought it back to life once again… er… well as close to back to life as the Headless Horseman will ever be I guess!  – JM Reid

You can listen to and download the track at Bandcamp