Over the MUNA [REVIEW]

Over the MUNA [REVIEW] 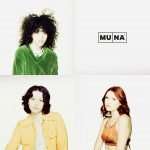 Pride month was taken to a new level this year, especially for the wlw (women loving women) community. This is all thanks to the rapid rise of Muna, an indie pop band created by Chicago native Katie Gavin and her closest friends, Naomi McPherson and Josette Maskin. Muna has taken over the LGBTQ music scene for years, from their love letter to queer youth with “I Know a Place” and their recent sapphic summer smash “Silk Chiffon”.

On June 24th, Muna released their self-titled album, simply called MUNA. For long-time fans, this is a resurgence that was deeply needed, as their last album “Saves the World” was released in September 2019. Throughout the past three years, Katie, Jo and Naomi stuck together in a world on fire. One that was already armed against them in the first place. All of the members identify as queer, with McPherson identifying as nonbinary using they/them pronouns. With all three being queer activists, 2020 was hard, to say the very least. But that didn’t stop Muna from their dream of taking over the pop scene.

In September of 2021, Muna released a summer hit in early fall called “Silk Chiffon”. To put it simply, this song is like every other summer pop song you hear on the radio when eating ice cream on the curb. But the main difference is that it is a blatant queer love song about a woman who falls in love with another woman and describes her as “soft as silk chiffon”.

This line in particular is calling to all people who have fallen in love, queer or not. The song features another beloved queer artist, Phoebe Bridgers and is very clear about who it is appealing to, bringing the fun of living back to life. Repeatedly saying, “life’s so fun” in the chorus, the song was heard on a majority of pop radio stations. And it is quite different from Muna’s usual sound, as with a good portion of the album.

Following “Silk Chiffon”, MUNA’s second track is titled “What I Want”. The sound is drastically different from the previous track, starting with silence followed by a bumping club beat that’ll wake you up. “What I Want” is a clear representation of what the queer community calls “delayed puberty”. Many queer people did not experience the same youth as their heterosexual counterparts so their twenties are usually when queer people find their community and come out of the closet to try new things.

“I’ve spent too many years, I’ve cried too many tears. But now, I’m gonna make up for it all at once ‘cause that’s just what I want.”

Gavin begins the song by stating “When I go out again, I’m gonna drink a lot, I’m gonna take a shot, ‘cause that’s just what I want.” The song is a big middle finger to those who had taken away her youth because she was a young queer person who didn’t know who she really was. But now that she has the community, she can do whatever she wants to do.

Another track that strays from Muna’s sound is “Kind of Girl” , the album’s fifth track. Compared to “Silk Chiffon” and “What I Want’ this song gives the listener whiplash in the best way. “Kind of Girl” came out as a single on April 28th, 2022. Gavin uses music to paint a picture of the kind of girl she is, someone she has been trying to get to know for years. After performing this live on the Tonight Show, Gavin wrote a beautiful statement on Instagram describing her struggles with mental health and being neurodivergent. “Kind of Girl” is reassurance, self-love and positive affirmations.

“I’m the kind of girl who owns up to all of my faults, is learning to laugh at them all, like I’m not a problem to solve.”

This album is flipping a coin when you hit the shuffle button. Are you going to cry? Or are you going to dance? Maybe both. Muna has been growing with intense love and support from their fans, ones that have listened to every single song and the ones who just entered the band’s beloved sphere of sapphic joy. Currently, Muna is on tour and will be arriving in Chicago on June 28th to perform at Lollapalooza. You can listen to the album here (below), Apple Music and other music streaming services.

MUNA is magic. What other band could have stamped the forsaken year of 2021 with spangles and pom-poms — made you sing (and maybe even believe) that “Life’s so fun, life’s so fun,” during what may well have been the most uneasy stretch of your life? “Silk Chiffon,” MUNA’s instant-classic cult smash, featuring the band’s new label head Phoebe Bridgers, hit the gray skies of the pandemic’s year-and-a-half mark like a double rainbow.

Pitchfork called it a “swirl of stomach butterflies,” NPR a “queerworm,” Rolling Stone “one of the year’s sweetest melodies, radiating the kind of pure pop bliss so many bands go for but almost never get this right.” For Naomi McPherson, MUNA’s guitarist and producer, it was a “song for kids to have their first gay kiss to.” And several thousand unhinged Twitter and TikTok memes bloomed.

Katie Gavin, MUNA’s lead singer and songwriter, wrote “Silk Chiffon” right after finishing the band’s 2019 album, Saves the World. That was an LP whose lead single began “So I heard the bad news/ Nobody likes me and I’m gonna die alone in my bedroom/ Looking at strangers on my telephone,” and which ended with a hypnotic, self-searching confession about failure and consolation. Since the beginning of their career, MUNA has embraced pain as a bedrock of longing, a center of radical truth, a part of growing up, and an inherent factor of marginalized experience — the band’s members belong to queer and minority communities, and play for these fellow-travelers above all.

But in “Silk Chiffon,” there was just longing, and it was blissfully requited at that. “It’s kind of a smooth-brain song,” Gavin says. “Saves the World was therapy on a record, and I was starting to see changes in my life, more moments of joy. It’s a big deal that someone like me could write that smooth!” What makes the confetti-gun refrain of “Silk Chiffon” so potent, though, is the underlying sense that the band understands exactly what has to be suppressed, or reckoned with, in order to sing it. “We are three of the most depressed people you could ever come into contact with, depending on the day,” McPherson said, with a smile.

Gavin, McPherson, and Josette Maskin, MUNA’s guitarist, are coming up on ten years of friendship. They began making music together in college, at USC, and released an early hit in the 2017 single “I Know a Place,” a pent-up invocation of LGBTQ sanctuary and transcendence. Now in their late twenties, the trio has become something more like family. They spent much of the early pandemic as a pod, showing up for each other and for MUNA — a project that at this point feels bigger than them — even when they weren’t sure about anything regarding the future.

They’d been dropped by RCA, and there was little in terms of income, no adrenaline to work off of, no live shows with audiences reminding them of the succor their songs provide. They asked each other: Is this career even feasible in this new reality? Can we find a way to be self-motivated, to be fulfilled intrinsically? For months, they surrendered to this confusion, to the reality of being humbled by change.

“You have to let things fall apart,” Gavin said. “And it was only possible because of this tremendous trust. I have so few relationships in my life where I have the kind of trust that I do with Naomi and Jo — where I can trust that there’s a higher purpose, that we can work through all the boundaries and compromises and mess that comes with long-term relationships, and then return to form.”

MUNA, the band’s self-titled third album, is more than a return. The band’s period of uncertainty and open questioning burned everything away, leaving a feat of an album — the forceful, deliberate, dimensional output of a band who has nothing to prove to anyone except themselves. The synth on “What I Want” scintillates like a Robyn dance-floor anthem; “Anything But Me,” galloping in 12/8, gives off Shania Twain in eighties neon; “Kind of Girl,” with its soaring, plaintive The Chicks chorus, begs to be sung at max volume with your best friends.

MUNA is working the source code of pop that pulls at your heartstrings; the album is full of longing and revelation and hard-won freedom. They’d made their first album themselves, with free plugins, in a home studio; they’d made the second one in proper sessions with co-producers, thinking they ought to professionalize. With MUNA, they did it all by themselves again, with newfound creative assurance and technical ability — in terms of McPherson and Maskin’s arrangements and production as well as Gavin’s songwriting, which is as propulsive as ever, but here opens up into new moments of perspective and grace.

“What ultimately keeps us together,” Maskin said, “is knowing that someone’s going to hear each one of these songs and use it to make a change they need in their life. That people are going to feel a kind of catharsis, even if it’s a catharsis that I might never have known myself, because I’m fucked up.” McPherson added, “I hope this album helps people connect to each other the way that we, in MUNA, have learned to connect to each other.”

And that’s what MUNA does, in the end: it carves out a space in the middle of whatever existential muck you’re doing the everyday dog-paddle through and transports you, suddenly — you who’ve come to music looking for an answer you can’t find anywhere else — into a room where everything is possible, where the disco ball’s never stopped throwing sparkles on the walls, where you can sweat and cry and lie down on the floor and make out with whoever, where vulnerability in the presence of those who love you can make you feel momentarily bulletproof and self-consciousness only sharpens the swell of joy.