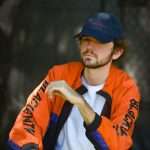 Madeon is 25 year old French artist/producer/phenom Hugo Leclercq. Hugo started composing music when he was just 11, and became known when his Pop Culture remix (a video featuring him live mixing 39 different tracks, featuring everyone from ELO to Britney Spears, into three and a half minutes of music) went viral in 2011. By 20 he had credits on records by Muse, Ellie Goulding, Two Door Cinema Club and Coldplay and co-wrote and produced three songs on Lady Gaga’s Artpop.

His debut album Adventure was released in 2015 to critical praise from press including Pitchfork, who noted that “on the path to what feels like something huge, Madeon’s journey is just beginning” and The Fader, who described it as“expansive, impossibly beautiful…one of the most radiant pop albums in recent memory,” Adventure was also featured on various “Best of 2015” lists including Complex, who pronounced it “an audio journey that can best be described as rapturous.” Good Faith, the new era of Madeon, follows Adventure and his massive collaborative project with Porter Robinson, “Shelter.”

Check out some great live photos from Lollapalooza in our live gallery here!