Lyn Lapid – In My Mind (Single)

Lyn Lapid – In My Mind (Single)

You know individuality the moment you see it—or hear it. 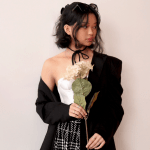 A classically trained musician, unpredictable vocal dynamo, and fearless genre-breaker, Lyn Lapidasserts herself as an individual through and through. At 18-years-old, the singer, songwriter, multi-instrumentalist, and member of vocal collective EARCANDY has unassumingly emerged as an unapologetic and undeniable voice for her generation. After attracting nearly 3 million followers on social media and generating over 100 million views, she breaks into mainstream pop culture with a series of 2020 singles for Republic Records and her forthcoming EP.

“When you hear my music, I want you to say, ‘Oh, that’sa Lyn song,’” she exclaims. “It would be amazing ifpeople think, ‘She gives me Lyn Lapid vibes.’”

The origin of those vibes can be traced back to her childhood in Maryland. A first-generation American born the middle kidof Filipino immigrants, sheinitiallystudied classical piano before eventually performing violin in an orchestra for sevenyears. Simultaneously, she developed her voice by imitating videos online. Along the way, she also learned ukulele and guitar(and obsessed over animated series,such as Steven Universe and Gravity Falls,in her free time).On December 31, 2018, she made the jump to YouTube by posting a ukulele and vocal cover of “Best Part” by Daniel Caesar and H.E.R. She went on to deliverD.I.Y. YouTuberenditions of everyonefrom Ariana Grande and Sabrina Claudio to Edith Piaf and Sarah McLachlan, amassing 8 million-plus viewsand countingon her channel.

In late 2019, she launched her TikTok page, building an audience of 2.7 million followersat a rapid pace. She joined the acapella group EARCANDY and continued a steady stream of posts. However, asnippet of her first original “Producer Man” exploded. Gathering 50 million views and 100thousandshares, it emerged as “the most-viewed unreleased demo on a TikTok video in 2020.”

Landing a deal with Republic Records, she finally uncovers the full versionof “Producer Man”as her debut single.Produced by Dan Nigro [Conan Gray, Carly Rae Jepsen, Lewis Capaldi, Sky Ferreira, Empress Of],an organic beat reverberates underneath her brassytheatricaldelivery. It shuffles over soft guitar and a glitchy swell of snaps and synths. On this bouncyjazz-inflected bedroom popparable, she shines a light onthe industry’s dark sidewith ominous verses a la “Got the girl to move to L.A., got the paperwork so she could sign her life away…now she’s in the hands of good old Producer Man.”

“It was about my first interaction with anybody in the music industry,” she explains. “A couple of months ago, I was approached by this guy. He seemed pretty nice. I didn’t likehow he pursued success though. He said, ‘You shouldn’t produce your own songs, because they won’t do well. You should do songs that will make you popular’. I disagreed and wrote this.”

With more music on the horizon, she will undoubtedly give you “Lyn Lapid vibes”forever.

“I want you to hear the messages I put out in my music,” she leaves off. “I’m talking about different things, whether it’s my experiences or mental illness.I hope youcanreallytune into the lyrics and what I’m trying to say.”