30 years ago, what we’ve come to know today as the annual Lollapalooza festival in Chicago began, initially as a final tour for Perry Farrell’s band, Janes Addiction in which bands, Siouxsie and the Banshees, Living Colour, Nine Inch Nails, Ice-T, Butthole Surfers and the Henry Rollins band toured together in what was described at the time as a “touring carnival of music, information and art”. The touring festival carried on from year-to-year through 1997 with many different bands with a gradual decline in ticket sales, but was attempted again in 2003.

However, in 2005, the decision was made to bring Lollapalooza to Chicago for two days and from then on, Lollapalooza would return to Chicago, gradually increasing the duration from two day to three in 2006 and then to the four days we know and love back in 2016.

In 2020, COVID-19 caused the shut down of virtually everything and carried on through 2021… it seriously was touch and go on whether Lollapalooza would be able to happen this year and if so, how would they enable the live event to happen while keeping everyone safe. Even with the vaccine, there is no guarantee of maintaining people’s safety and honestly, it really is a “we’ll have to wait and see” kind of situation to see if this years Lollapalooza, with over 90% of attendees having been vaccinated was able to conduct the festival without it spreading any further and risking even more people’s lives.

Despite the grim reality of the potential fear of COVID re-infections, and numerous schedule changes before and even during the festival, I feel that the festival was a great success and very well organized despite the shorter timeframe the organizers had with which to pull it all together. If you arrived early, getting into the festival was quick and easy, even with the vaccination status and security check; it was a very smooth process overall.

When this years lineup was announced, there were a lot of people grumbling on social media and some even had puzzled reactions, and, truth be told, that happens almost every year; there is just no way of pleasing everyone. But, I myself was surprised to see Journey on the lineup; it was not a bad thing at all, it just was surprising.

In fact, Journey played a great set on the Bud Light Seltzer stage Saturday night, so I was very happy they were there. Many people did not know who more than half of the artists even were on the lineup, since some of them had experienced literally overnight success in 2020 and either never performed a fest or any concert at all, but that did not hinder ticket sales by any means, including platinum ticket sales, sales were good overall.

Many of the festival partners have returned to Lollapalooza, but there were some new ones as well, which included Hulu who live-streamed the festival, Grubhub, Solana and Waterloo Sparking Water. Of the three flavors of Waterloo Sparking Water that I tried, I am sorry to say that only the original flavor worked for me, but there were plenty of people drinking it, so that could have just been me.

Love Hope Strength Foundation was back again this year and I put myself on the list and got swabbed to save lives, we’ll see how it goes over the coming weeks though when I am contacted by them for the next step since I’ve never done this before.

I cannot thank the people and volunteers over at REVERB enough for having kept the festival as clean as it was and protecting the environment, their presence was incredibly essential and appreciated!

For those fortunate enough to already be T-Mobile customers (like myself), T-Mobile offered one sweet perk and that was to be able to watch artists on the T-Mobile stage from the comfort of their T-Mobile Club Magenta which allowed people to also be able to charge up their phones, access to a bar, and a chance to win prizes.

It was indeed most comfortable and I saw Miley Cyrus’ performance, as well as Sir Chloe’s performance from there on Sunday. Another great perk besides great service and customer support (seriously), is that customers get access to Hulu included in their phone plan, so it was a double-win on Sunday night being able watch the Foo Fighter’ performance in a much, much less crowded space that was also hosted by Hannah Rad.

The Chow Town vendors kept everyone fed with some of the best food in Chicago. Featuring the return of Wow Bao, Chubby Wieners, and Connie’s Pizza (which was some very good, and very cheesy pizza!), to name a few. In 2019, I recall seeing a fair amount of food and debris all around Chow Town, but this year, it was nowhere near as bad, I believe the volunteers from REVERB must have been working diligently to keep things cleaner for everyone this time around, and it showed. 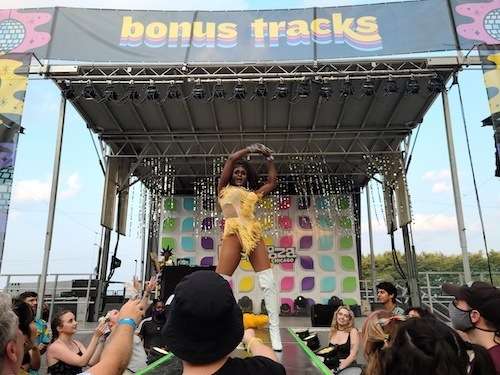 One (figurative) casualty of COVID this year was unfortunately, but understandable, the Kidzapalooza section and in place of Kidzapalooza, they introduced the Bonus Tracks stage which featured special guests, an exclusive interview with Steve Aoki and White Reaper through Hulu and the Best of Chicago Drag, among other events throughout each day. From what I observed of the Best of Chicago Drag, there was a great enough amount of interest and I would welcome its return, but definitely not at the expense of Kidzapalooza. so, I hope they can find a way for both to return next year. 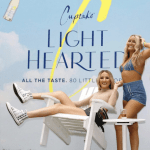 As mentioned in my recap from day one, Cupcake Vineyards has returned and expanded in a big way from previous years to give you the best festival experience possible.

Whether you had your face put on their delicious Frozie (frozen selfie) drink, or tried their new Cupcake LightHearted, the expanded space allowed fans to relax in beautifully decorated spaces which each had their own themes, one of which was based on Joy and made to look like a beach, complete with a “Joy Guard” booth that housed a DJ that kept the vibe going.

If you did not get a chance to stop by, please make sure you visit their website at: https://www.cupcakevineyards.com/ and follow them on their socials to stay updated on their latest drinks. They’ve been at Lollapalooza for at least five years now and expect them to be back again next year, so try to plan some time to see them next year.

There was a lot of good to this years festival… let’s face it, given that it almost did not happen due to COVID, it could have went a lot worse. But, let’s start with all the musical acts who always bring great sounds and great times to Lollapalooza and all the great food in one of the greatest cities in the world! As compared with previous years, there were not too many differences with regards to how it ran and that is great news!

The bad, well, the bad always seems to come down to scheduling (for me anyway), if there were a way of staggering performances a bit more so people can have better opportunities of seeing all the artists they want to see without having to sacrifice one artist over another, that would be best, if possible.

Sure, there is the wonderful Toyota Music Den and Bud Light Seltzer Sessions stages which offer some additional opportunities to see some artists including surprise guest artists like Machine Gun Kelly, but perhaps having fewer artists each day, spread more apart might allow fans to have better opportunities to see the bands they love on the main stages, just a suggestion anyway.

Prior to Lollapalooza, I came across a great resource on Facebook, an unofficial, but incredibly useful group called, Lollapalooza LGoD (Official) which you can find here: https://www.facebook.com/groups/322283268108712. One of their main stipulations is that the group will not allow ticket exchange posts and only offer useful information and dialog to help people know what is happening, what is to come and they even conduct meet-ups. For next year, I recommend you join their group if you’d like to get all the details for Lollapalooza.

The organizers for Lollapalooza have already confirmed 2022 dates, July 28th – 31st, to be precise, and that it will still be here in Grant Park, so we have a lot to look forward to with that news.

All in all, I would say it was another great Lollapalooza, but I would welcome some change for 2022… change things up like stages, genres, artistic feel and the overall esthetics of the festival… consider the 31st year an opportunity to rebrand in a fresh new way.