Chicago, IL – Unfortunately, on day four, there were still scheduling conflicts for the artists I wanted to cover and in some cases, watching mini-sets of them was not possible either, given the distance that Lollapalooza covers from end to end. As an example, I was planning on seeing the Music In The Key of Chicago performance on the Bud Light Seltzer stage and Radkey on the Grubhub stage, but there were too many things going on around the T-Mobile side of Grant Park that made it logistically impossible. So, hopefully I’ll be able to catch Radkey at Riot Fest and it would be nice if there would be something like the Music in the Key of Chicago next year. 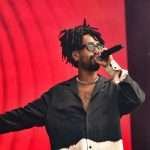 12:00pm – 12:45pm – Chiiild‘s vibe was perfect for an early Sunday afternoon performance, and after three days and nights of Lollapalooza intensity, it was a perfect way to start the day off.

Yonatan Ayal started off his set with “Wasting Time” off of his latest album, Hope For Sale which was accompanied by the gorgeous violin and keyboard work of Lauren “LYON” Malyon who also sang backing vocals on “Back To Life“, “Awake” and others. Pierre-Luc Rioux’s guitar and Yonatan’s vocals on “Gone” were carried further by a gentle, cool breeze that blew throughout Grant Park, and I’ll tell ya, you cannot get more chill than that, the whole set was perfect! Find out more about Chiiild on the official website at: https://www.chiiild.com/ 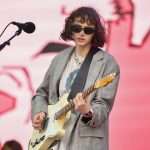 12:45pm – 1:30pm – A brief stroll from the Lake Shore stage on over to the very large T-Mobile stage and Sir Chloe continued the vibe where Chiiild left off. They performed hit songs, “Untie You“, “July“, “Too Close“, “Animal” and “Michelle” all from the debut album, Party Favors as well as a couple unreleased songs.

Watching Sir Chloe, (once again from the comfort of the T-Mobile lounge), the band sounded even better live, (as most bands tend to do), but there was something about their vibe that fit the afternoon sun on the immense T-Mobile stage that was perfectly paired together.

The band, Sir Chloe consists of Dana Foote on guitar and vocals, who had started off in music by teaching herself guitar by learning from Mel Bay books then learned the piano, mandolin, the accordion and the harmonium. Then, she and her guitarist, Teddy O’Mara both went on to Bennington College for formal training from there. In addition to Teddy, the band also includes her brother, Palmer Foote on Drums and a recently added bassist named Emma. Follow Sir Chloe on Instagram here! 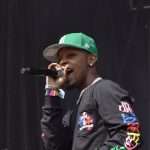 3:15pm – 4:00pm – After Sir Chloe’s set, I checked out some of Toosii’s set especially since he is getting so much hype right now and he had an incredible turnout too! Check out Toosii’s tour dates here: http://tour.toosii2x.com/

I then made my way towards Chow Town to finally try one of the vendors there and since I am ‘all about’ pizza, I gave Connie’s Pizza a try. I’ll tell ya, if you like cheesy pizza, Connie’s Pizza is absolutely the cheesiest and very delicious! Who was your favorite food vendor at Lollapalooza? 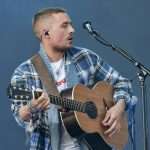 5:15pm – 6:15pm – With not a cloud in the sky, the Bud Light Seltzer stage reverberated with the bass of the keyboard intro to the song “Lost” held out longer as Brittany Howard’s set comes to a close, slightly delaying the start of Dermot Kennedy‘s set. However, once her set concluded, Dermot took the stage and sung the opening lines, “When everything was broken, the devil hit his second stride…” and I don’t know about you, but this past year and a half, everything and everyone sure has felt broken, haven’t they?

Dermot’s emotion and passionate vocals moved everyone who heard his set, as they sang along with songs from his platinum-selling album, Without Fear, like “Power Over Me“, “An Evening I Will Never Forget” which he stated, “best summed up his life from the beginning until now”, “All My Friends” and the new single, “Better Days” in which he envisioned a day just like it was there in Chicago “about getting through tough times”. With lyrics like,

“I know you’ve been hurtin’
Waiting on a train that just won’t come
The rain, it ain’t permanent

These have got to be some of ‘the most’ timely lyrics of our time and it was most certainly perfect for that moment in the sun in our great city of Chicago… it was just so right!

Dermot is currently on his ‘Better Days’ tour which will take him to the northeastern states and then on over to England and Ireland and on these dates he’s given local artists a chance to open for his show through a competition and all you have to do is fill out this form and you’ll be entered!! Visit Dermot’s official website here: https://www.dermotkennedy.com/

The density of the crowd immediately after Dermot’s performance had gotten exceedingly thick pretty early in the evening, which is great to see, in fact. But due to that fact, I decided to go back to my room and carry on watching Lollapalooza as presented by their new partner, Hulu since I already have been a member thanks to T-Mobile including it as part of their phone plans. So, how could I not make use of that?

It was ten years ago that the Foo Fighters performed at Lollapalooza and were hit with that fierce storm as they started to play “My Hero” in the rain. Thankfully, they were graced with beautiful weather this time as they once again performed it in a toned down version which included a piano interlude right before Dave Grohl let out a blood-curdling scream as they brought it back to the version we all know and love! Their whole set was great and included the Dee Gee’s “You Should Be Dancing” Bee Gee’s cover too.

It was great that Lollapalooza offered the livestream once again and streaming through Hulu made it that much better!