Day two of Lollapalooza started off promising, beautiful weather and a nice early start in from the suburbs left me with plenty of time to prepare for a couple interviews in the afternoon. I was surprised because while I walked down Michigan Avenue, people were already lined up. It was 9:30 and in speaking with a some people, was told that they were there for a half an hour already.

Not having personally attended Lollapalooza prior to this year, I was surprised that people would line up so early, but perhaps that is normal? I have to say that I admire their passion and support for their favorite artists and in this case, it seemed an even split between Con Brio, Haelos and Curt Reynolds. 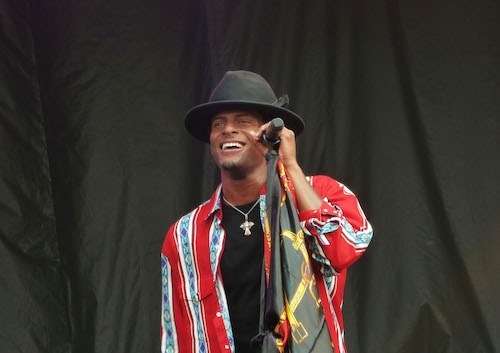 For us, Con Brio was the not-to-miss band of the hour and really, it was hard to divide the time between bands that were playing at the same times on the different stages. I was also interested in Haelos, but Con Brio’s new album ‘Paradise’ which was just released last month was the tipping point for me, the album is truly remarkable and their set on the Lake Shore stage completely blew me away. Read the full review here.

After interviewing the lovely Jessy Wilson and Kallie North of Muddy Magnolia‘s (listen to the interview here) and Ziek McCarter of Con Brio here we had some time to check out Kidzapalooza a bit.

There were quite a bit of great activities for kids actually and quite a bit of space available for the kids to roam and explore. I am surprised though that they didn’t locate it closer to the main entrance and/or with its own entrance so more families could have easier access to it without perhaps as much people traffic in just getting to the other side of the grounds. I am sure they had their reasons though.

But, Kidzapalooza had many activities kids could get involved with, including tie dye bandanas, a Hip Hop workshop, tattoos and lets not forget the music! From noon to 5:30 each day, there were kid-friendly bands playing with an hour in between each band, so typically four bands per day usually.

School of Rock Allstars were present three of the four days showcasing the best of the best of School of Rock students, today was not one of those days, unfortunately. While there, we saw Frankie + the Studs performing and engaging the children with dancing and funny enough, only one boy wanted to participate at that time; yeah, boys at that age are not usually too into dancing, but they did a great job encouraging more involvement and everyone was having a great time.

Almost immediately after Con Brio’s performance, the weather turned cloudy; a nice relief for me in particular but now, those clouds were bringing a return to the rain, most of it light and no umbrella was necessary, so Roman and I explored more while we waited to see Muddy Magnolias at the BMI stage.

Some of the other points of interest Lollapalooza offered were the Lolla Time Warp, an opportunity for festival-goers to look back on the highlights from years past. There was an F.Y.E. autograph tent, a tasting truck from Pepsi-Cola for a new drink called 1893, a wine lounge that was presented by Cupcake Vineyards and lets not forget about all the many bar and beverage located very conveniently throughout the grounds.

Some important and helpful amenities at Lollapalooza were Lolla Cashless, where you can pay for food, drinks or merchandise with a simple tap of your wristband and avoid having to dig out the wallet every time, it also offered some sweet perks at the Citi Cardmember lounge. Cottonelle offered a nice refresh lounge for people to cool down at in the shade, clean up a bit and enjoy a chance to use some free wifi and reconnect with friends in between bands.

State Farm was also present and in addition to the chance to recharge yourself, also offered some nice, cool air-conditioning, lockers, and complimentary sunscreen, sunglasses, fanny packs and more! One area that I did not know about until later was the Toyota Music Den that had some performances from acts like Dua Lipa and Muddy Magnolias, to name just a few, but I didn’t realize it was located right by the BMI stage… just didn’t stand out on the map for me for some reason.

So, it was unfortunate that I missed some bonus performances there, but it was great to know that more people could see some performers more than once! There was so much more to explore, but we headed on over towards the BMI stage to watch Muddy Magnolias! Read the review here.

Caught some of Mac Miller‘s set, but no, we did not notice Malia Obama dancing; only heard about it later. Mac Miller had A LOT of people with their hands in the air heavily into the sounds and he did sound phenomenal, but we wanted to get over to the Pepsi stage for Wolf Alice. Read the review of Wolf Alice’s performance here.

After Wolf Alice, I had to take the Metra back home; thankfully Metra gave great rates for the Lollapalooza days, $20 round trip each day for the whole four day event, thanks Metra for making it a cost effective and enjoyable way to get to and from the festival! If you didn’t take advantage of Metra’s deal this year, keep a lookout for hopefully a similar deal next year!

Check out more great live photos from Lollapalooza in our live gallery here!