TINLEY PARK, IL – In 1973, the legacy that we’ve come to know about the rock band KISS was born, after Gene Simmons and Paul Stanley left the band they were in, (Wicked Lester), answered an ad placed by Peter Criss and brought on Ace Frehley to the band, all the components were in place and KISS was ALIVE! 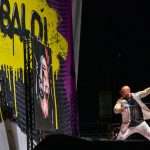 Opening the show Saturday night however was performance painter, David Garibaldi who has appeared at The White House, on ESPN, America’s Got Talent, The Today Show and more. Garibaldi creates work of art on stage for charity, raising money for Crew Nation, a Global Relief Fund for Live Music Crews. Those interested in donating and potentially leaving with one of his works of art signed by KISS were encouraged to visit https://WinKissArt.com to donate with a minimum donation being $10.

Bob Dylan’s “All Along The Watchtower” (as performed by Jimi Hendrix) started playing and Garibaldi went to work, painting color-by-color, layer-by-layer on what eventually became a beautiful portrait of Jimi Hendrix. Periodically hyping up the audience and speedily returning to work with a furious pace of brush-strokes, and paint splatters, he created a total of three paintings, of Jimi Hendrix, John Lennon and of course, KISS.

Garibaldi is an amazing talent and he is doing phenomenal work for Crew Nation, you can learn more about him on his official website here: https://garibaldiarts.com/.

When KISS took to the stage, they pulled no punches, hitting Chicago with everything they had for their END OF THE ROAD World Tour, which was one of the best performances I’ve seen and was loaded with explosions, lasers, blood, fire, the sharpest video screens I’ve ever seen and they even brought out the disco ball for good measure!

They started off the night with hit songs, “Detroit Rock City” and “Shout It Out Loud” off of their 1976 album “Destroyer”, which turned 45 this year and will be re-released as a Super Deluxe 4 CD and Blu-Ray Box Set next month.

Check out an acoustic version of Beth here:

Gene Simmons, Paul Stanley and Tommy Thayer were lowered down from platforms at the top while drummer, Eric Singer’s drum riser was also lowered. Flames, fireworks and explosions rocked through the air and the crowd went absolutely crazy!

While not completely sold out, the venue was packed, with tickets having been sold from $39 all the way up to $1,000 per ticket, and the crowd extended well back into the lawn where they came prepared with blankets for the brisk night ahead.

Looking back on KISS’s long and illustrious career, nothing else to compared to them – of all the top rock bands of the seventies, Led Zeppelin, Rolling Stones, Pink Floyd, Judas Priest and Rush (to name only a handful).. KISS stood out on so many levels. From their image, to marketing, overall sound, theatrics, shock value and possibly the most solid band branding that any band has ever had in Rock and Roll history, or shall I say, KISStory?

Speaking of KISStory, in 2014, KISS was inducted into the Rock And Roll Hall Of Fame by the power and super-strong support of their KISS ARMY that the band created early on in their career. I have never seen a stronger fan-structured support mechanism than the KISS ARMY and it had only gotten stronger over the decades.

After the opening two songs, Paul Stanley highlighted how the band’s first show in Chicago was at the Aragon Ballroom in 1974, now stop a second and think back to 1974 if you were around back then, what were you doing at that time and think back at how different the world was. No computers, internet or cell phones, TV had, what, 13 channels? Music choices were limited to 8-Track and cassette tapes and vinyl, and bootlegging concerts was illegal or ‘frowned upon’ to say the least. Now, you can’t go to any show without cell phones up in the air, and possibly in your way, right?

Things were also very different for KISS shows, though they always pushed the envelope to bring you the best shows possible, while the level of musicianship has always remained constantly above anyone else. Which bring us to the next song, “Duece” off of their 1974 debut album “KISS”, with the giant screen behind them showing clips of the band in the seventies alongside them on stage, matching the choreography to the screen, it was an iconic moment in music to see. KISS had grown with technology, and while parts of me wish I could have seen KISS back in the early days, what KISS delivers to fans now is unparalleled and far exceeds anything they’ve ever done before.

KISS played a very well balanced set between newer and older material along with Tommy Thayer’s awesome guitar solo (sonic alien battle), Gene Simmons’ blood spitting, Eric Singer’s drum solo and Paul Stanley’s excursion to the back end of the venue to sing a couple songs over in the back.

Check out the full setlist:

Fan favorites were, “Detroit Rock City“, “Shout It Out Loud“, “I was Made For Loving You”, and of course, “Rock And Roll All Nite“, but the whole show was spectacular!

It was a complete feast for the eyes and ears with far more than you would ever get from other artists and it is very sad that this is, in fact, the end of the road for the tours, but, like the saying goes, all good things, must come to an end (unfortunately). There are still many dates remaining on the End Of The Road Tour which started in 2019 (before COVID-19 lockdowns interrupted it) which includes KISS KRUISE X and many dates in Las Vegas before going overseas. Planned dates will take them up through July of next year.

Make sure you catch KISS while you can on this final tour, you won’t want to miss it!