The 6th annual award show will be broadcasted live from sunrise, FL VIA Telemundo on April 15 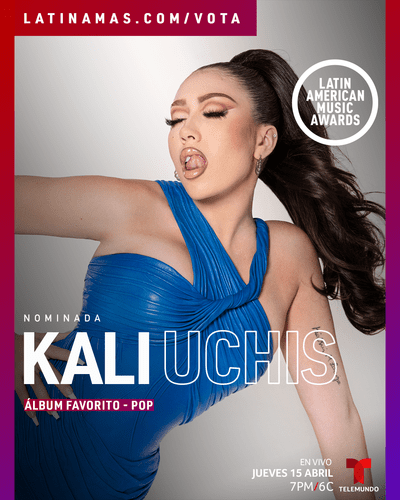 “An appropriately escapist work of Latin dream-pop, Sin Miedo is set in a rosy Venusian paradise in the cosmos, where Uchis flits about as a benevolent, breathy pop seraph…A genre anarchist, she whips up one-of-a-kind songs that speak to a growing generation of cool kids who occupy the space between Anglo American and Latin American cultures.”—Los Angeles Times

“Her second album Sin Miedo (del Amor y Otros Demonios) ∞, sung for the first time almost entirely in Spanish, is a heart-struck devotional to the genres she loved growing up in the U.S. and Colombia.”—NPR

March 2, 2021— Grammy and Latin Grammy nominee Kali Uchis is nominated for her first Latin American Music Award for Favorite Pop Album and is the only female nominated in the category. Following the enormous success of her debut and critically acclaimed Spanish album, Sin Miedo (del Amor y Otros Demonios) ∞ executive produced by multi-platinum hitmaker Tainy, the Colombian-American songstress has become both a fan and media favorite in both the U.S. Latin market as well as in Latin America.

Paying tribute to today’s most influential and Latin artists as voted by music fans in the tradition of the American Music Awards, the 6th Annual Latin AMA’s will be broadcast live on Telemundo from the BB&T Center in Sunrise, Florida on April 15, starting at 7pm/6c with a red carpet preshow and followed at 8pm/7c by the three-hour awards show.

“telepatía” has accumulated 70 million global streams, averaging 3 million streams a day for the past week. Additionally, the song has been added to some of Spotify’s biggest playlists including ¡Viva Latino!, Today’s Top Hits and Pop Rising. The track is taken from Uchis’ second studio album, Sin Miedo (del Amor y Otros Demonios) ∞, out now via Interscope to widespread critical acclaim. The album features singles “La Luz” with Jhay Cortez and “Aquí Yo Mando” with Rico Nasty and appearances by PARTYNEXTDOOR and Jowell & Randy.

Raised between Virginia and Colombia, Kali Uchis rose to prominence with her project Por Vida in 2015. Uchis’ 2018 debut album, Isolation, received widespread critical acclaim and was featured on Best Of lists in Rolling Stone, Pitchfork, NPR, Vulture and many more. Uchis has collaborated and shared stages with Gorillaz, Jorja Smith, Juanes, Diplo, Major Lazer, Tyler, The Creator, Daniel Caesar, Bootsy Collins, Snoop Dogg, Kaytranada, Leon Bridges and more and has toured the world over, with much-lauded sets headlining Tropicalia and at Coachella, Governors Ball, Bonnaroo, Austin City Limits, Lollapalooza and many others.