Journey Top Off A Day Of Exceptional Talent At Lollapalooza

Journey Top Off A Day Of Exceptional Talent At Lollapalooza

Chicago, IL – Starting out of the gate, Lollapalooza pulled no punches with the great musical lineup with a one-two-three punch of artists, Glove, Jac Ross and Cannons taking up the first hour and forty five minutes on three stages!

12:00pm – 12:30pm – Tampa, FL band, Glove was an immediate interest to see when the lineup was announced, capturing the essence of the 80’s goth/new wave artists while truly maintaining an original sound that strikes a chord for fans today. Their presence, stoic, but their sound is addictive and in essence, an homage to the band “The Glove” which was a one-time project featuring Siouxsie Sioux of Siouxsie and the Banshees and Robert Smith of the Cure and similar artists of the time. While only performing for 30 minutes, they still managed to captivate the crowd with songs like, “Glass“, and “Behaviour” being stand-out tracks. We’ll have an interview with them coming very soon and be sure you follow this band as they have tons of potential! – https://www.glovetheband.com/ 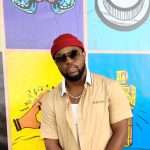 12:15pm – 1:00pm – Caught about 30 minutes of Jac Ross‘ set on the Lake Shore stage which featured the talented dancer, Sydney, for his rendition of Seal’s “Kiss From A Rose”, her moves were as graceful and as smooth as Jac’s vocals which were uplifting and inspirational. All those in attendance were visibly moved by his soulful set as he played the keyboard for most of his songs, but then took center stage to make more of that connection with his fans. Jac Ross really should have been headlining Lollapalooza for the amount of talent that he possesses, he truly is remarkable! We will have an interview from Jac Ross for you coming very soon, so stay tuned for that and be sure you follow him on Instagram here! 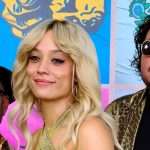 1:00pm – 1:45pm – Los Angeles’ Cannons started their set at 1 on the T-Mobile stage for their first ever Lollapalooza performance; first time in Chicago, in fact, and what a way to make your first appearance, on one of the two largest stages! The dreamy trio got their big break when Netflix picked up their song, “Fire For You” after COVID-19 shut down their day jobs, their lives were changed forever for the better. Other songs performed, “Talk Talk“, “Bad Dream” and a new song entitled “Hurricane” off of their upcoming album called…. watch our interview with them here to find out the name.

The rest of the day was spent bouncing from stage to stage checking out mini-sets, with Rence and Joy Oladokun both on the BMI stage, Tate Mcrae on the Grubhub stage, Serena Isioma back on the BMI stage and I checked out a bit of the Best of Chicago Drag on the Bonus Tracks stage which we’ll have more information about that for you coming soon too.

The wave of Lolla fans was very evident as a huge number of people made their way over to the T-Mobile stage for Post Malone’s set, however, I was en route to see Limp Bizkit and Journey.

I only caught the last 10 minutes of Limp Bizkit, but what I saw was decent The last thing I heard from them was from their Results May Vary album and so, I gotta admit, I can’t say I fully understand what Fred Durst was going for with his look, other than giving people a bit of a preview with his new album called, Dad Vibes. 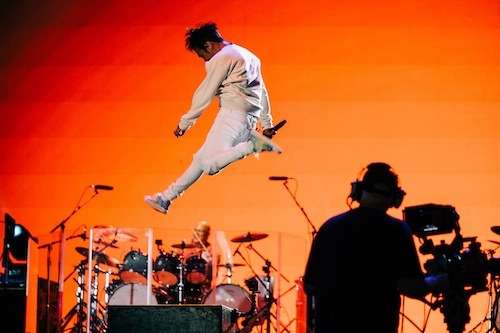 8:15pm – 10:00pm – Once the initial keyboard of “Separate Ways (Worlds Apart)” began, all the memories from my youth came flashing back in a great way! The night was totally ideal, barely any clouds and upper 70 degree temps… how much more perfect could it be for a night of great rock music like this?

I had never seen Journey before, so, I can’t really compare Arnel Pineda to Steve Perry’s vocals other than what is on Youtube, but his vocals are remarkably close and honestly, his vocals are perfect either way and his stage presence was great too; running all over and jumping across the stage from time to time as well.

In many ways, I feel that Neal Schon’s guitar work was as much, if not more a trademark of Journey’s sound than Steve Perry’s vocals were. His guitar solos have always been the perfect blend of melodic, technical and always complimented each song without going too far in any kind of way.

Jonathan Cain’s piano work was also a highlight of the evening, and was showcased briefly before “Who’s Cryin’ Now?“, it was elegant and complimented the tone of the song tastefully.

Many of the visuals that were shown during the night on the Bud Light Seltzer stage were quite sharp and in the case of “Wheel In The Sky“, they just looked plain awesome!

Hearing all the incredible songs from various times of my life was especially great that this took place at Lollapalooza, and the performance, light show and visuals were stellar, the musicianship was impeccable, and strolling down memory lane again with Journey was priceless. – https://journeymusic.com/

Enjoy your final day of Lollapalooza!