Formed in 2017, the Tampa, Florida band named Glove (not to be confused with The Glove, which was a one-time project from Siouxsie Sioux and Robert Smith), has “always had a broad vision about the sound and didn’t want to stick with any one thing” said Rod Wendt, singer and guitarist of the band. You can totally feel their influences in their music, yet they successfully manage to channel those influences in a way that isn’t repeated, which was very refreshing especially for an 80’s music fan like myself.

The band had just performed on the Grubhub stage at Lollapalooza, basking in the uncomfortable noon sunlight while giving their all and performing a perfect set which included songs, “Glass“, “Behaviour” and several other unreleased songs. When asked about their Official Lollapalooza Aftershow at Subterranean later that evening, Brie Deux, (drummer/synth/vocals) stated, “We belong in the darkness” with Justin Burns (bass/synth/vocals) adding “We definitely thrive in those types of environments.”

Their presence at Lollapalooza was greatly appreciated though because there literally was no other band like them and therefore made my Lollapalooza experience a great one as a result. 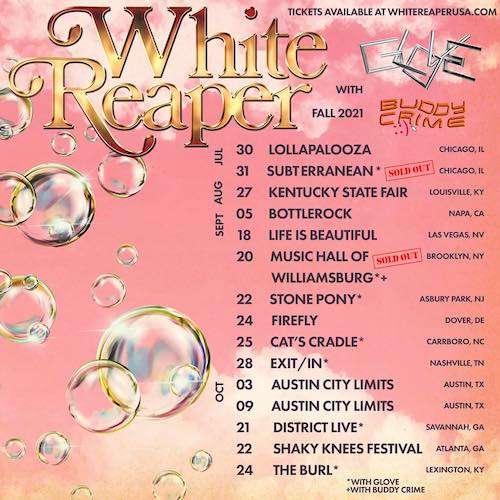 The band was fortunate enough to not have to go through a lot of the typical struggles most bands do with playing the local club circuit in and around Tampa, instead electing to work on going out on tour within the first few months and had “a lot of help from our friends” which included The Nude Party as one of those friends who they supported on the road.

Speaking of the road, the band will be hitting the road again supporting White Reaper, which includes east coast and west coast shows as well as Austin City Limits down in Austin, TX and the Shaky Knees festival in Atlanta, GA.

They also already have 2022 dates booked through February of next year, so, be sure to follow them on their socials or check their tour dates here to see if they will be coming to your city.

The band are hoping to release their album, Boom Nights around October/November, so also make sure you’re following them on Spotify and Apple Music so you don’t miss it when it drops!

Check out our live photos from their performance here!

Rod Wendt, Brie Deux and Michelle Primiani began playing music together in Tampa, FL in 2017 and shortly thereafter found their missing piece, Justin Burns, to form the modern dystopian bliss that is Glove. The stylish and magnetic 4-piece group underscores the best of the 1980’s synthetic new wave sound with a contemporary rock n’ roll edge that is sure to propel the band to the forefront of the alternative rock genre.

After self-booking DIY shows for two years, the band supported indie rock darlings The Nude Party and Broncho on a string of east coast shows, honing their infectious live performances fueled by 70’s inspired dance rhythms and buzzing cosmic guitar melodies. After catching the attention of guitarist Brad Shultz of Cage the Elephant, Glove went into into the studio with Scultz in Nashville, TN to produce their debut album, Boom Nights.

In April of 2021, Glove released the first single from their forthcoming album titled “Glass”, landing their first Spotify editorial playlist on “New Noise” as well as festival slots at Lollapalooza, Shaky Knees, and Levitation. The band will hit the road with alt rock band, White Reaper, following the release of their second single “Behaviour” on July 21, 2021.

“Behaviour” is a radiating track that speaks to the static reaction to operate and perform as you’re told – a chain reaction of words and expressions, a sentiment that the song’s vocalist Rod Wendt charmingly teases throughout this ear-worm. Glove will release Boom Nights in the fall of 2021 to coincide with a handful of headlining dates, doubling down on their place in contemporary music.