Like most girls her age, “Living for the Weekend” artist Madison McWilliams is passionate about music. Unlike most girls her age, Madison’s passion for creating music has led the teen phenom from Austin, Texas — once dubbed “pop music’s latest darling” by “Tribeza”Magazine — to achieve many of her dreams, including releasing an EP, making music videos, being spotlighted on KTLA, singing the national anthem at NASCAR live on NBC Sports, and performing at Walt Disney World’s Magic Kingdom.

Fresh off her second SXSW performance, Madison, just 17, isn’t exaggerating when she says, “My whole life is surrounded by music.” And it is her music — the Top 15 “NextWave” Musical.ly artist isn’t just a vocalist, she’s a writer on all of her songs.

Ready for a spot under Christmas trees worldwide this year, GRAMMY® Award-nominated multi-platinum superstar JESSIE J releases her first-ever holiday album, This Christmas Day, in stores and at all digital retailers via LAVA/Republic Records. Get it HERE.

“I love Christmas music and am so excited to release this album.” Jessie J talks about the new abum, “There are a lot of classics on the album and one original, ‘This Christmas Day’, which also became the title track. A very close friend of mine lost her brother and watching someone I love go through such heavy grief everyday was so hard.

I wanted to write something that could just bring a little comfort. On Christmas Day we celebrate yes, but she and millions of other people around the world will also reflect and remember loved ones they so wish were here still. It’s a day where family and friends unite in love. This is the meaning behind that song, and why I called the album “This Christmas Day”.

Assembling the perfect fireside tracklisting, she breathes new spirit into the likes of “Santa Claus Is Coming To Town” and “Silent Night” produced by none other than the legendary David Foster. Meanwhile, she delivers two dream collaborations, joining forces with Boyz II Men for “Winter Wonderland” and “This Christmas Song” featuring Babyface. The full tracklisting can be found below!

On the horizon, be sure to catch Jessie J on various TV shows as she brings these songs to life like never before.

The Endorphins – This Christmas
https://www.facebook.com/theendorphinsofficial/

She is the singer with the golden voice. He is the producer and wordsmith. They’ve known each other all their lives and they practically grew up in the middle of the bursting music scene in Stockholm together. They are The Endorphins.

“Our music is all about inducing endorphins. It’s about love, friendship, clubs, parties, and sex. We wanna bring good vibes, with a touch of future RnB. The vibe of our songs is inuenced by the good vibes that were oating around NYC in the 70’s – that escape from reality that the disco era was built upon” says The Endorphins.

Katie Garibaldi is an award-winning Americana singer/songwriter and guitar player from the San Francisco Bay Area. She is an endorsed Breedlove Guitars artist and has been named a Music Connection Magazine Top 100 Live Unsigned Artist. An avid national touring performer, Katie has amassed a devoted fan base, due to her engaging live shows and personal connection to her listeners through her music.

Susie Blue and the Lonesome Fellas – Santa Bring My Baby Back To Me
http://www.susiebluelonesomefellas.com/

Solitaire Miles has always loved singing Swing tunes. Her grandmother, a singer with a big band in the late 1930s, exposed her to the music as a child. Several members of her family were musicians and she grew up hearing Swing and Retro Country at Sunday afternoon family concerts. She performed as a teenager in the late 1980’s with well known Jazz saxophonist Bruce Johnstone in the NW Pennsylvania area where she is originally from.

Solitaire originally planned to be an opera singer, but while attending DePaul University in Chicago, she met the legendary Swing violinist Johnny Frigo who encouraged her to sing Swing. After college in the early 1990’s she began working in Chicago with Sax Maestro Von Freeman, and pianist Willie Pickens, who also played on her self-titled release in 2006.

“I was lucky to have their guidance because they were playing with the greats in their day.” During the late 90’s while living in New York City, she performed with the great trumpeter Doc Cheatham, learning lots more Swing tunes. From these venerable bandleaders, she learned more about phrasing. Since then, she has since been an important part of the Chicago music scene performing with pianist Willie Pickens and leading her own groups.

Susie Blue and the Lonesome Fellas may be regarded as a surprise by some of Solitaire Miles’ swing fans, but it is a logical step in her evolution. “Looking for ways to enhance my vocal agility, I took a job with a with local Retro Country & Western Swing group. I fell in love with the material and began researching the style to include into my regular repertoire.

As a Swing singer, I found that it was closely related to what I have always done.” Western Swing was formed in the mid-1930s as a combination of early Country music and Swing, developing into its own style. Milton Brown and his Musical Brownies were among the first group in this idiom, with Bob Wills and the Texas Playboys setting the standard and becoming the most popular of all Western Swing bands. While their repertoire included Country ballads and old-time fiddle music, they also performed swing with an instrumentation that often included fiddles, steel guitar, mandolin and banjo along with a standard rhythm section, horn soloists and singers.

It became a different way of playing Jazz, but often swinging just as hard as the Big Bands. Johnny Frigo played fiddle in the Western Swing band “The Chore Boys” in the mid 1950’s on the Chicago radio program “WLS Barn Dance” which was syndicated in radio stations over 20 prairie and Midwestern states. Chicago supported the full-time country western radio show on WLS from the late 1920’s through the early 60’s, so the city does have a legacy of Western Swing music. Miles, always inspired by her mentor Frigo, has followed in his footsteps with her new album. 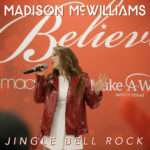 Like most girls her age, “Living for the Weekend” artist Madison McWilliams is passionate about music. Unlike most girls her age, Madison’s passion for creating music has led the teen phenom from Austin, Texas — once dubbed “pop music’s latest darling” by “Tribeza”Magazine — to achieve many of her dreams, including releasing an EP, making music videos, being spotlighted on KTLA, singing the national anthem at NASCAR live on NBC Sports, and performing at Walt Disney World’s Magic Kingdom.

Fresh off her second SXSW performance, Madison, just 17, isn’t exaggerating when she says, “My whole life is surrounded by music.” And it is her music — the Top 15 “NextWave” Musical.ly artist isn’t just a vocalist, she’s a writer on all of her songs.

Say Sue Me – Christmas, It’s Not A Biggie
http://www.damnably.com/say-sue-me/

Say Sue Me are a surf-inspired indie rock quartet from Busan, South Korea. Friends since 5th grade Jaeyoung Ha (Bass) and Byungkyu Kim (guitar) met drummer Semin Kang at high school and played in band’s together until the winter of 2012, when one day they were drinking tea and beer at a tea shop in Nampo-dong, when Sumi arrived. They liked her speaking voice and immediately offered her a spot as the vocalist in a new band that would become Say Sue Me. Sumi Choi turned out to be a natural at songwriting.

Sadly the original drummer is now recovering from a semi-comatose state. While they eagerly await his recovery, they met the new drummer Changwon Kim through the internet.

Damnably Records of London, England released a Record Store Day exclusive 7″ EP [Semin] and Compilation album of 1st and EP [Say Sue Me] in UK/Europe to coincide with the bands debut UK tour supporting Japan’s Otoboke Beaver that started at a sold out 100 Club in London.

The band have been championed by Lauren Laverne, Gideon Coe, Tom Ravenscroft and Don Letts on BBC 6Music and were included in the 4 BBC Playlists. A lot of the KEXP have also taken a shine to the band and Elton John on Beats 1.

Following their debut at SXSW festival Say Sue Me’s sophomore album “Where We were Together” was released in April 2018 ahead of their ‘Busan Calling’ debut UK/EU tour that ended with three capacity showcases at The Great Escape Festival.

The release of a RSD 4 track 12″ covers EP “it’s just a short walk!” and the 7″ single “Just Joking Around” followed with Tugboat Records in Japan also releasing the album and a tour followed.

The band return to the UK/EU for their WWWT Tour this October.

Jeremy Ravine – For the Lost and Alone Christmas is Hope
https://www.jeremyravine.com/

Jeremy Ravine, a Nashville based musician and software developer, has combined his talents to create a project that lets audiences step into an interactive musical world. Ravine makes Indie Pop music and is building a video game that will correlate with his songs, allowing listeners to simultaneously play a video game as an animated Jeremy Ravine character and listen to his music at the same time for a multimedia musical experience.

The project is signed to Nashville based independent record label, Vohnic Music LLC, a label that focuses on combining illustrations and music to create multimedia music endeavors. After the launch of his project in September 2018, Ravine has released two singles and already has over 30 thousand streams across platforms. He has had placements on Spotify’s editorial playlist “New Music Friday Christian” and his music is on rotation at local Nashville radio station, WRLT. Now, just in time for the holidays, Ravine plans to release an original Christmas song titled “For the Lost and Alone Christmas is Hope”.

Jeremy Ravine’s new single, “For the Lost and Alone Christmas is Hope”, takes a look at the deep realities of Christmas time. The song is hopeful and heartfelt, reflecting on the familiar feelings and cliches of the Christmas season, both merry and melancholy, with a melody that plays with a juxtaposition of festive and mature emotions. The lyrics dive into the feelings of loneliness brought about during the holidays, claiming love as the perfect gift to bring about hope. The single was co-written with and produced by Vian Izak, a Vohnic Music artist and producer with over 10 million streams across platforms. This is Jeremy Ravine’s third release.

Walk Off The Earth – Have Yourself A Merry Little Christmas
https://www.walkofftheearth.com/

Walk Off The Earth is a Juno Award winning, multi-platinum musical phenomenon currently taking the world by storm. Based in Burlington, Ontario (just outside of Toronto), their brilliant 5-people-playing-one-guitar interpretation of Gotye’s “Somebody That I Used To Know” exploded on Youtube, garnering over 180 million views. Since then, the band has released a string of successful original songs including, “Red Hands” (#1 at AAA), “Fire In My Soul” & “Rule The World”; sold out venues across the globe and collaborated with some of the biggest artists in the world (Keith Urban, Snoop Dogg & Steve Aoki).

The chemistry between the members of Walk Off The Earth is undeniable. Marshall, Sarah and Gianni’s individual vocal stylings mesh seamlessly with Taylor’s haunting harmonies and keys while soaring over epic melodic arrangements held together by Joel Cassady’s driving and prolific percussion work. Their independent spirit, unstoppable work ethic and awe-inspiring creativity has catapulted Walk Off The Earth into new and uncharted waters with only bigger and better things on the horizon.

Visit Wal Off The Earth’s official site for more information.

Listen to the previous episode here!