As a shy teenager, Fumanti didn’t start singing until age 17 when she joined her church choir. When she opened her mouth, her director was pleasantly surprised at her natural, classical soprano voice. She followed each choral song effortlessly, eventually gaining enough courage to solo.

Because her family disapproved of chasing an artistic career, Fumanti decided to go to school to study law. Throughout this time she continued going to rehearsals, hiding each practice from her family.

Fumanti’s passion to sing soon overshadowed her law aspirations and she moved to Canada by herself, to pursue an opportunity to record an album, realizing she would regret it forever if she didn’t at least try. Not knowing the language or anyone in the country, she had to learn and grow quickly as her career fast-tracked. She began singing duets with famous Italian singers and recording her own music. Fumanti finally pursued the dream her grandmother never did.

Music as Reflection of Life

Fumanit’s grandmother is not the only person she’s paid homage to with her music. Because of her fathers recent passing, she has dedicated her latest album to him, choosing to sing songs about grief, hope, and love. Unfortunately, Fumanti did not even get the chance to visit her sick Father in Italy before his passing because of COVID travel restrictions. In the midst of her sadness, Fumanti had a son come into her life, bringing immense joy that poured into her music and surroundings. With extravagantly polar emotions, Fumanti centered her album around the cycle of life and how each sadness brings a joy. She says this album is her most vulnerable one yet.

The music Fumanti sings is a constant reflection of her personal life. One of her proudest life accomplishments is mothering her four children. She has two biological daughters, one adopted daughter, and her youngest son they are fostering, soon to adopt. Fumanti is a firm believer that women do not have to choose between a career and being a mother. Her experiences are proof that women can chase their dreams while building a family. While she stays rather quiet in her house, Fumanti takes her children to performances with her so they can listen to their mother pursuing her dreams and sharing her music.

The power of music, Fumanti says, is that it stays forever and allows an audience to feel true emotions and connection. Which each song she sings she looks towards what her audience needs: “Every time I sing I think about love and hope and whatever people need through a song.”

How has COVID changed your career?

Just having released her 12th album, Fumanti recalls how different its creation was because of the pandemic. The last time she performed on stage for an audience was December 2019, but she has continued to give virtual concerts and record new songs.

Fumanti looks at what she does as “beautiful freedom.” She is a mother, a singer, and shares her passions in order to help others. Viewing her life as beautiful freedom allows her to remain passionate about music without thinking about money, fame, youth or physical beauty. She focuses on sending messages of love, hope, and peace to her audience, especially with the hardships the world has faced this year. Even through grief and unforeseen obstacles, Fumanti says, “We can create our life” when we keep working towards our dreams. 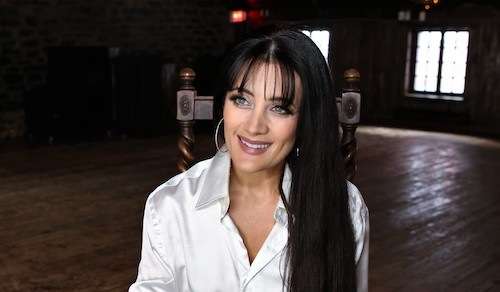 Biography:Giorgia Fumanti was born in Fivizzano, a medieval village in Tuscany, and grew up in the nearby small town of Aulla, at the foot of a 13th century castle (the Fortezza della Brunella) and in Monterosso al Mare, located in the heart of the famous Cinque Terre. She studied voice at the renowned Conservatorio di Musica Arrigo Boito in Parma, Italy, where her unique soprano voice and talent caught the attention of conductors at Decca Music, London, Sony Music, Warner Music and EMI, in New York with whom she signed her first international recording contract.

The album From My Heart was a resounding success on Billboard’s Top 20 Classical Crossover Chart and rose to number one of the best sellers in Japan and South Africa. His album Elysium reached # 4 on the Classical Crossover Chart. His French Album, Je Suis, produced by Guy St-Onge, reached the top 20 sales at the ADISQ Awards, while his 10th album, Amour, reached No. 1 on the ADISQ Best Sellers Awards in 2018. His 11th album, Aimons-nous was released in May 2019.

Winner of several prizes and distinctions, The Universal Peace Foundation named Giorgia Fumanti, in September 2018, “Ambassador of Peace”, a life nomination given following her performance at Central Park and at the famous Times Square in New York, during ‘a ceremony of the International Day of Peace decreed by the United Nations. She also received the Audience Award at the Kremlin in Moscow (AMA Music Awards), the prestigious Premio Lunezia nel Mondo award (Charles Aznavour, Andrea Bocelli …) in Italy, and the Personality of the Year Award by the CIBPA Foundation in Montreal.

Giorgia Fumanti has been selected to sing the theme song Better City, Better Lifeat the Shanghai World Expo and was the special guest of CCTV in China to sing during the Beijing Olympics. She represented America at the Beijing Paralympic Games closing ceremonies. She performed the national anthem at the prestigious National Hockey League All-Star Game, held in Dallas, United States, and at the opening ceremonies of the World Sports Games Combat Agreement, in Beijing, alongside of the famous Jackie Chan.

Among others, she had the pleasure of singing for Al Gore, Vice President of the United States and recipient of the Nobel Peace Prize, for the Mayor of New York, Michael Bloomberg, for the governors of the states of Nevada, Texas and Georgia, and many more. Giorgia also had the privilege of meeting Pope Francis at the Vatican.

the opening ceremonies of the Meixi Lake International Art Festival (Changsha, China), at Haixinsha Park (Guangzhou, China), at the National Center of Performing Arts (Beijing), the Taipei Arena, at the Kremlin in Moscow, at the Teatro Mayor of Bogota, Teatro La Fenice (Venice), the Seoul Arts Center, the Athens Arena (Greece), the Greek (Los Angeles), the Basilica of Saint Joseph’s Oratory, Notre-Dame Basilica, Montreal Cathedral and many others …

Her performances have also led her to give a televised concert with the MBC Pops Orchestra, in Korea, at the closing ceremonies of the International Horticultural Expo in Xian, at the QQ Awards Show, at the Olympic Stadium in Beijing, at the CCTV New Year’s Eve.

Gala and at the Chinese Spring Festival, at Bravo TV in Canada, on the first channels in Italy (RAI, TG1, TV 2000, Radio Monte Carlo), at the Macy’s Holiday Parade, performances at the Loren Chinese Top Model Reality Show, broadcast on Guangxi TV, on the soundtrack of the Korean film My Mother, the Mermaid, on the PBS channel in the USA and others.

Following on from the success of her last 2 albums “Amour” and “Aimons-nous” and the video “Hallelujah”, Giorgia’s new international album “Mystic” will soon be released followed by a series of concerts in 2021 – 2022.