Getting To Know The Lollapalooza Lineup By TikTok

Getting To Know The Lollapalooza Lineup By TikTok

When it comes to Lollapalooza, Cori Cascone is by no means a stranger to the festival, for four years already she’s learned a lot since her first overwhelming experience back in 2015 and has been happy to help people get familiar with the lineup and share some tips as well. To her, Lollapalooza means ‘happiness’, with all her experiences and memories being shared with her and her friends in this great city of Chicago and being surrounded by the world’s best bands over the span of 4 days, how can it be filled with anything [but] happiness?

While she had been to many concerts prior to Lollapalooza, her first Lolla was “Amazing and overwhelming at the same time” referring to how big the grounds are between each stage and how crowded it got as the day progressed. On that note, her first tip is very basic, but often overlooked, “don’t skip breakfast”.

Depending on when you arrive at Lollapalooza, it can be a very long and exceedingly hot day and starting the day off with a good meal will help keep you energized as you make your way from stage to stage. Along those lines, Cori recommends utilizing Lolla Cashless by adding your card to your pass; it will just be one less thing for you to have to worry about throughout each day, and who wants to worry about ‘anything’ at a festival, right?

Another recommendation Cori has is, “if you are going with your friends, set up meeting spots at certain times throughout the day to reconnect with everyone if you split up. If your phone dies, or you don’t have service, it is a good way to count on meeting up with everyone without having to worry.” And adding to that, plan to meet somewhere outside of Lollapalooza in case of an emergency evacuation. If bad weather comes in fast, make sure you know a good place you all can meet, that allows Lollapalooza attendees a place to go for shelter, this is very important, in fact.

This next recommendation Cori shared with us, (and this is for you to start doing now), “take the time to get to know all the artists on the lineup,” which brings us to TikTok…. With over 123,000 followers on her TikTok channel, Cori has been sharing hundreds of music-related videos for over a year. “When I saw this year’s lineup, I didn’t know a lot of the artists lower on the list.

Looking at it can be intimidating and I know a lot of people with the same concern.” So she decided to invest 1-2 hours per video to introduce select artists in (so far) a twelve-part series of TikTok videos, entitled “Getting To Know The Lollapalooza Lineup”. When she publishes each video, she tags each artist and she has already gotten a number of artist’s appreciative comments like, “Thanks for the love y’all, see y’all there!” from Migrant Motel who will be headlining the BMI stage on Thursday, July 29th. For some of the artists, she also lists other festivals the artists will be performing at aside from Lollapalooza. 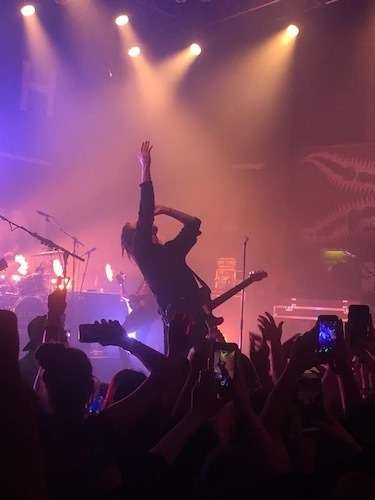 So, how do you find Cori’s TikTok channel? Simple, if you have the TikTok app already on your phone, simply search for her at: @coricaz, or on a desktop computer or laptop, you can go here https://www.tiktok.com/@coricaz to browse through each Lollapalooza video which you can easily identify with the Lollapalooza lineup image among each of her other videos.

Looking back on Cori’s first Lollapalooza experience again, she wished that she had done more research on all of the artists in the line up since she only watched artists she knew at that time. If you are discouraged about not knowing a lot of the artists playing at Lollapalooza, and that is keeping you from going. Cori has got you covered! Once again, just hit up her TikTok channel right here Coricaz so you don’t miss out on any great artists!

Lastly, when asked about which artists are on her radar for Lollapalooza and the subsequent aftershows, she responded, “Foo Fighters, Miley Cyrus, Dayglow, Modest Mouse, The Backseat Lovers, Young The Giant, Journey, and Aly&AJ! I also have ticket’s for Young The Giant’s aftershow!”

There are so many other tips to keep in mind for Lollapalooza, like be prepared for all types of weather and so much more, but we want to help you to make the most our of your Lollapalooza experience, get the most out of this once a year event that you can and best of all, create those memories that will forever be linked with “happiness” for the rest of your life. So, check out her TikTok channel, like her videos and share them with your friends and have the best Lollapalooza ever!