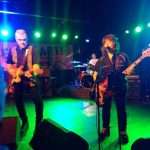 They released their first recording in 1981, a flexi-disc released through Talk Talk magazine. This was followed by Words Move, a self-released 4-track EP, and next was a four-band split cassette, Fresh Sounds from Middle America. They recorded their first LP, Action Reaction, prior to relocating to Chicago in late 1982. The debut LP was released in 1984 by Fever Records and distributed by Enigma. In 1986, released their second LP, Swimming With Sharks through Enigma’s subsidiary, Restless Records.

The original lineup reformed in January, 2020, and in December, 2020, they released a collection of previously recorded (but never released) songs, titled Oh Yeah No. Originally recorded by the late, great Chicago engineer Iain Burgess, the final mixes were completed by Steve Albini.

The group plans to collaborate, play live when they can, and release more new music in the near future.