It was a treat to catch Eddie Vedder and his band on the first of two nights at the historic Auditorium Theatre in Chicago! No, not Pearl Jam but his current solo band, The Earthlings, to highlight his solo album dropping on Friday. This tour began February 3 in New York and as of last night was already halfway done. It stops in only six cities over the course of about three weeks – an insanely short time for an artist of Vedder’s caliber!

His band consists of Chad Smith of Red Hot Chili Peppers on drums, guitarist Josh Klinghoffer – also formerly with the Chili Peppers, Chris Chaney on bass – Jane’s Addiction, guitarist Andrew Watt and Glen Hansard. As Eddie put it “Watching these guys create and perform in the studio together; we had to get it out on the road!”

From the moment he stepped on stage, you could tell that Vedder was among friends. He was raised in Evanston, and spent a lot of time in Chicago. There is a certain comfort level when you can gaze into the sea of faces before you and call out friends and family that are there by name! The Auditorium Theatre is a majestic room and the venue where he saw his first concert (Bruce Springsteen). 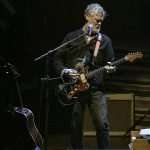 The two plus hour set consisted of almost two dozen songs interspersed by short stories and included covers by various artists along with a couple of Pearl Jam numbers, but the bulk were cuts from his “Earthling” album. They had the crowd on their feet the full time – I did not see anyone sitting all evening.

Glen Hansard opened the evening with a solo performance on acoustic guitar and piano. He was very warmly received.

The tour heads to the West Coast with shows in San Diego, Los Angeles and Seattle.

Eddie Vedder has served as Pearl Jam’s frontman since 1990.

His debut solo release was the 2007 soundtrack album for the film Into the Wild for which Vedder won a Golden Globe for the song “Guaranteed.” In 2012, Vedder’s sophomore solo album, Ukulele Songs, received a Grammy nomination for Best Folk Album.