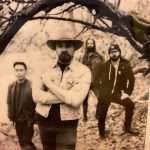 Musical weirdos from Illinois with a dark, introspective vibe that’s both joyous and melancholic—that’s Dreamjacket. They’re the sonic blanket you wrap yourself in to drift off into a shoegazey haze. Tuck in and listen.

Lost at Last has a heavy vibe to it without being tragic. The album is about embracing the search for hope in the dark – the low point on the wheel; make the choice to keep moving in the face of passing time and tragedy and eventually you will rise up on its spokes. The band’s sound? Imagine “The Jayhawks” writing the score for a David Lynch movie — tight, muscular songcraft with beautiful melodies and surprisingly dark lyrics.

Lost at Last is a truly impressive collection of songs and drops October 26th, 2021 both digitally and via limited edition 12” vinyl. Dreamjacket is playing an album release show put on by Kickstand Productions December 3rd at Subterranean (downstairs bar stage) with fellow Chicago artists good son and Dream Version.

Get your own free band page here!