Kicking off the day’s music on the Lake Shore stage was San Francisco’s Con Brio. Formed in 2013, the band has been creating an amazing buzz for their soulful music and electrifying performances.

The weather was a perfect day to ‘Kiss the Sun’ but it felt more like the sun was kissing us with its scorching rays while we waited for the band to take the stage. A good crowd of roughly fifty or more people had amassed prior to the show starting and at least some of them had not known much at all about them and I smiled to myself because I knew they would be in for a great surprise once they saw and heard them.

Once Brendan, Marcus, Benjamin, Patrick, Jonathan, and Andrew got on stage, everyone was screaming with excitement and anticipation as the sharp and soulful sounds from Benjamin’s guitar ignited the flame of their set which opened with the title track of their debut album, ‘Paradise’. Once Ziek (short for Ezekiel) made his way on stage however, the excitement peaked as he strutted and gyrated his way towards the mic with more charisma than one man should be allowed to possess.

The set, much like the band, defied and exceeded my expectations by playing only a few songs from ‘Paradise’, a few songs from their EP ‘Kiss the Sun’ and a few songs that I must confess I was not familiar with, which made this whole experience even more refreshing. Typically, bands will tend to saturate their live sets with a majority of it coming from their latest release, but this was not the case here with Con Brio.

I would say one of the points about Con Brio that I find I appreciate the most, both with their music in general as well as this live performance is that while Ziek is an amazing performer and extremely talented vocalist with a most impressive range, at no point does he ever overshadow anyone else in the band.

In fact, during the performance, at least most of the band had their moments to shine with a guitar solo by Benjamin Andrews, a saxophone solo by Marcus Stephens on ‘Never Be the Same’ and a synth solo by Patrick Glynn which also featured Ziek joining in on the keys as well. Brendan Liu ‘Gave it All’ as well with some powerful trumpet playing and when not playing, kept the energy level alive by dancing and moving all over the stage with Ziek and that energy level that they (the whole band) generated was very contagious getting everyone in the audience moving, singing and clapping all along with the band.

By shows end, a mere 45 minutes later, those attendees that mentioned not knowing what Con Brio was like, were in a state of shock, not knowing what just hit them. I must confess that even I, who knew what the band was like, (thanks Youtube) wasn’t prepared for the power, volume and energy that Youtube will never be able to capture.

That is why I now end this review with the following statement, if you get the chance to see them in your town, you NEED to see and experience them in person, it is just that simple. Con Brio, in Italian actually means Con, (with) Brio (vigor) and I can’t think of any other band that brings their music and performance with any more vigor than they do. 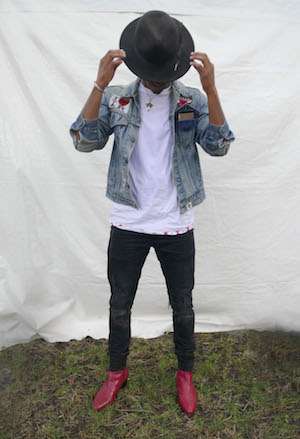 Biography: The night before Con Brio headed into the studio to record their first full-length album, 23-year-old Ziek McCarter had a dream. In it, the singer received a visit from his father, an Army veteran who died at the hands of East Texas police in 2011. His father delivered an invitation: Come with me to paradise.

McCarter woke up with a song in his bones. “It was one of the most spiritual moments of my life,” he recalls. It was up to him, he knew, to rise above injustice, and to perform in a way that lifted up those around him as well. To make Con Brio’s music a place of serenity, compassion — even euphoria — right here on earth.

Paradise, which saw the San Francisco band teaming with legendary producer Mario Caldato Jr. (Beastie Boys, Beck, Seu Jorge), is the result: a declaration of independence you can dance to; an assertion of what can happen when the human spirit is truly free.

Formed in 2013, Con Brio is the offspring of seven musicians with diverse backgrounds but a shared love for the vibrant Bay Area funk and psychedelic-soul sound pioneered by groups like Sly & the Family Stone.

By 2015, when the band self-produced their debut EP, Kiss the Sun, Con Brio had already become a West Coast institution on the strength of their magnetic live show, with McCarter’s swiveling hips, splits and backflips earning him frequent comparisons to a young Michael Jackson or James Brown.

After a busy 2015 spent touring the U.S. and Europe, playing alongside veterans Galactic and Fishbone, and racking up critical acclaim on proving grounds like Austin City Limits — where PopMatters declared Con Brio “the best new live band in America” — they headed home to parlay their momentum, chemistry and tight live sound into a full-length record.

In an era when much has been made of the “death of the album,” there’s no question that Paradise, released internationally in summer 2016, is a fully-formed journey — a trip made all the more immersive by Caldato’s raw, live style of production. “We tried to create a narrative in the studio, in the same way that we segue between songs live,” explains McCarter of the record’s arc.

From the first primal wail of Benjamin Andrews’ electric guitar on the title track — Paradise is bookended by intro and outro versions — the album tells a story about modern life through its contradictions: “Liftoff” speaks of an urge to fly, to transcend the day-to-day with a starry, bird’s-eye view. “Hard Times” brings us crashing back to earth with the struggles of city life, inequality, and a fractured society desperate for healing. “Money” is a revolution, a rejection of societal pressure to equate success with a paycheck and abandon one’s dreams in the process.

“Free & Brave,” the band’s most overtly political anthem, is also arguably its most infectious. Over a driving R&B groove courtesy of veteran rhythm section Jonathan Kirchner and Andrew Laubacher (bass and drums), McCarter name-checks Trayvon Martin and Dr. Martin Luther King, Jr. Clearly inspired by his own personal relationship with police brutality, the song is equal parts heartbreaking and hopeful.

“‘Free & Brave’ is in part a response to the Black Lives Matter movement, but it was also created to serve as a reminder — to myself and to whoever finds joy in that song — that there is a light there. We don’t have to get bogged down, we don’t have to feel helpless,” says McCarter. “We might not see it on a daily basis, but we are still ‘the land of the free and home of the brave’…I still take pride in that, in what pieces of joy and happiness we can create here with our actions.”

Of course, songs about love and passion remain Con Brio’s native tongue. (At a recent Australian festival in which the band shared a bill with D’Angelo, one journalist told McCarter his sex appeal had eclipsed that of his longtime idol.

McCarter continues to have no comment.) So it’s a refreshing surprise that the strongest love song on Paradise, in fact, is “Honey,” a sweet, spacious and vulnerable tune that allows the band’s horn section, Brendan Liu and Marcus Stephens, to shine. Though the band’s built a reputation on sonic bravado, it’s choices like these — moments in which the music’s power flows from its subtlety — that truly highlight where Con Brio is going.

As for where they’re literally going: The second half of 2016 will see Con Brio embarking on an ambitious international touring schedule, including stops at the lion’s share of major American music festivals (Bonnaroo, Lollapalooza, Summerfest and San Francisco’s own Outside Lands); Fuji Rock, Japan’s largest annual music event; Montreal Jazz Fest, the North Sea Jazz Festival in Rotterdam, the Netherlands; London; Paris; and more.

Which is not to say they’re intimidated. After performing most of these songs live throughout the past year, the team is running on adrenaline, and they’re thrilled to finally put this record in people’s hands. To bring old fans along for the journey, to help new fans lose themselves in a beat or a message. To spread music that, hopefully, shakes away the daily grind — and nurtures listeners’ dreams about what their version of paradise on earth might look like, even for the duration of a song.

Ziek McCarter already knows what his looks like, because Con Brio’s building it. And from where he’s sitting, they’re well past ready for liftoff.