“All Event” Weekend Passes Are On Sale Now At MetroChicago.com

Individual Events Will Be Announced May 21 At 10 AM CT At ColdWaves.net 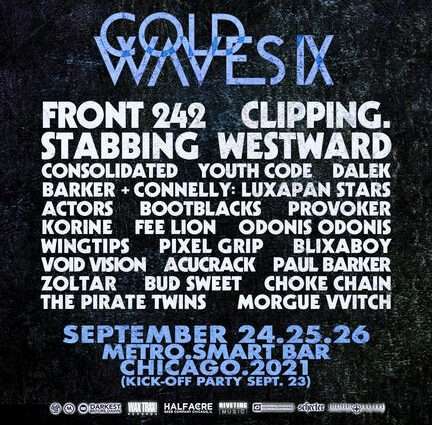 Like many shows and festivals that were sidelined by the COVID-19 pandemic in 2020, COLD WAVES announces its return this fall with an anticipated in-person event. The ninth edition of the beloved industrial music festival has been rebuilt with many of last year’s scheduled performers, and is set to take place September 24-26, 2021 at Chicago’s Clark Street compound, housing adjoining venues Metro, Smart Bar and G-Man Tavern.

A small number of discounted “all event” weekend passes are on sale now at www.MetroChicago.com. Fans are encouraged to buy early as COLD WAVES weekend passes traditionally sell out. Single day GA tickets will go on sale Monday, May 24 at 10 am CT also at www.MetroChicago.com. As well, festival producers will announce all individual events on Friday, May 21 at 10 am CT at www.ColdWaves.net as well as official social media pages.

COLD WAVES Founder (and member of Acucrack) Jason Novak says, “After almost 10 years since Jamie’s passing, it’s amazing to me to see how much this event helps carry people, helps support and enrich them… something he was known for doing himself. Not just the charitable aspects, but the event being such a source of positivity for so many, it’s pretty great. We can’t wait to bring this year’s amazing lineup together and levitate the audience after such a dark year.”

Paul Barker (Barker+Connelly, Ministry, Revolting Cocks, Lead Into Gold) adds, “Too many people I know have needed the kind of health services that COLD WAVES fundraises for. I feel fortunate to be involved as a performer, ambassador and friend, and look forward to every year’s festival.”

Chris Connelly (Barker+Connelly, Revolting Cocks, Sons of the Silent Age), also says, “COLD WAVES has become part of my musical DNA, the friendships, collaboration and the incredible sensory overload makes me always look to the future with the joy of a journey undertaken with likeminded souls. So proud to be a part of it each year.”

COLD WAVES will adhere to all state and city-wide regulations to allow a fully compliant event for attendees, and organizers will purposely limit the capacity of all venues for the duration of the weekend. As well, fully open doors, an outdoor sidelot with food trucks and seating space, plus access to the all-night Smart Bar “COLD WAVES Lounge” aims to provide patrons a safe, exciting and respectful event.

On Friday September 7, 2012, a collection of musicians, peers, co-workers, friends and family gathered together to put on a memorial concert at Bottom Lounge in Chicago to celebrate the life of beloved local musician and sound-engineer Jamie Duffy, who passed away earlier that year. The memorial show was referred to as COLD WAVES: The Jamie Duffy Concert, in no small part due to the high number of “Cold Wave” artists who participated in it. Cold Wave is considered to be a sub-genre of industrial music and more specifically a melding of heavy, melodic rock and dark electronic dance music.

Since then, COLD WAVES has annually upped the ante, adding larger and more exciting (and rare) talent to the lineups, expanding to three nights and eventually other cities in a quest to celebrate the innovators and new talent in the dark music genres. Over the last few years the fest has proudly presented rare appearances from such luminaries as Front 242, Revolting Cocks, Filter, Nitzer Ebb, Godflesh, Meat Beat Manifesto, KMFDM, Stabbing Westward, Severed Heads, Clock DVA, Cold Cave, Pankow, The Black Queen, Fear Factory, Front Line Assembly, Pop Will Eat Itself, and many more, some bands appearing in the U.S. for the first time in 15-20 years.

COLD WAVES also focuses on raising money and awareness for the service industry and music venue staffing communities in their battles against addiction, depression and suicide. From bartenders and bouncers, to stagehands and engineers, this is a very high-risk demographic, often very under-insured and under-advocated. A portion of the COLD WAVES proceeds, including custom auctions and raffles go to Darkest Before Dawn, a local Chicago charity focused on exactly these issues, providing subsidized care and support for low-income members of that workforce. Alongside the DB4D charity, the festival invites other like-minded, socially relevant organizations to set up tables and materials throughout the weekend.