If there is one thing artists can write endlessly about, it is the rose flower. Regardless of the color or size, the flora has been a muse to artists since humans first learned to create. It symbolizes passion, the deep red symbolizing a deep love. However, roses do have thorns and can easily hurt its pursuer. Claudia Fermer takes that concept and reflects it in a much bigger mirror.

With stage name Claude, Fermer has released a plethora of music over the past three years, the most recent being the song ‘roses’. The song is the second single of Claude’s up and coming album titled “a lots gonna change” set to release on August 12th, 2022. Claude is currently signed with American Dreams Records, a Chicago-based record label dedicated to “showcasing art inspired by wonder, intention and hope” who also happen to be friends with the singer/songwriter. 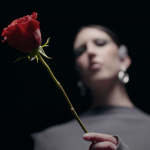 Claude had released her first EP Enactor on February 12th, 2021 with a sound specifically crafted for the pop scene. However, like many young artists, there’s a twinge of unconventional sound that can only be described as “dream pop”. Indie pop, Dream pop and other variations of the pop genre are on their way to completely revamping what is traditionally known as “pop”.

Claude is no Britney Spears and she doesn’t want to be. Claude takes inspiration from phrases she’s heard or read, such is the case with ‘roses’. Claude explains that she was inspired by the novel ‘Love in the Time of Cholera’ by Gabriel Garcia Marquez. In the novel, the main character Florentino eats gardenias and roses to represent his undying love and obsession with the other protagonist, Fermina. In the description under the ‘roses’ music video, Claude states:

“I thought about a rose and the thorns on its stems, and how someone eating a rose was perfect metaphor for how as humans, we’re so self-torturous, mentally and emotionally, and very unforgiving to ourselves.”

In the novel, Florentino consumes the flora to represent his obsessive love for Fermina, despite how sick the act is making him. Claude takes this concept into her song ‘roses’ and makes it very clear in the music video. Not only is the video beautifully shot, Claude’s presence on camera contains a very specific aesthetic with a ghostly voice that makes neck hair stand tall. Her voice is incredibly soothing, much like Billie Eilish and rising queer musician Arlo Parks. However, like these other singers, the gentle voice paired with the melancholy lyrics, especially those in ‘roses’ and ‘Everything’s Great’, the vocals become quite haunting.

Claude showcases her beautiful aesthetic and voice through this video. She even created her own outfits for the main focus shots, such as the pointed purple and gray dress, which she explains “…Play(s) with the making and release of tension to show the back and forth we have with ourselves in certain situations.” The song represents that suffering we as humans seem to enjoy in the hopes that something better, maybe less painful, will come along. However, to Claude, this is incredibly damaging as seen in these lyrics:

At the end of the video, Claude pricks her finger on the rose in question. The entire video is incredibly mesmerizing and gives the audience a good sense of what Claude’s next album will focus on.

Despite having 3,188 monthly listeners, with ‘Everything’s Great’ amounting over 32,000 listens, Claude is still making a name for herself in the music scene. She is a young ‘twenty something’ (this single has 5,105 listens since this review was written), and is doing her best to establish who she is as a musician and exactly what her brand will come to be as she gains more and more loyal followers with the rise of Dream pop.