There isn’t another genre that can capture the intense, raw emotion that comes from rock music, and badcandy proves that. The local Chicago “post-garage-rock” band have been slowly releasing track after track, each containing the same vitriol as someone who is fed up with having their heart broken. As both vocalist and guitarist for the band, Alex Subak has achieved a high level of raw emotion in her lyrics that any person who has experienced a bad relationship could relate to. Their single “Dare You” released in February of 2020, captures just that.

“You think you’re strong enough to help poor little me? You don’t know what strong is, just wait and see.“

The lyrics, motivated by a person reaching a rageful limit, are amplified by the tasty guitar solos and musical stylings of the rest of the band. Subak, alongside Mike Vinopal, Todd Gutner and Matt Walters have taken the rock genre and revived it like many other bands out there. But badcandy is unique in the sense that they combine all facets of the genre, including the post-rock you would listen to after a bad day in high school. However, there is a nostalgia about their sound as if you were taken back to the 90s and exposed to the heart-accelerating, heart pumping stylings of Nirvana. And this is just the tip of the iceberg.

The band excitedly released “Empty” on April 29th, easing themselves back into the scene after the events of 2020. The song was well received by fans and gave new listeners a taste of what the band had to offer.

On June 9th, they surprised their fans by releasing “Conscience” a song that challenges a toxic relationship, asking what exactly weighs on the abuser’s conscience if anything at all.

“Does your conscience eat you alive?“

Their singles get increasingly harder as you listen, especially if you hone in on the lyrics. There is always a challenge given to someone in each song, this is the case with “Conscience” and “Dare You” where Subak refers to “you”. It’s a painful, yet uplifting method of releasing rage and reminding oneself of their worth. That’s just one of the reasons why these songs are worth multiple listens. Subak and Vinopal’s skills with their guitars is nothing less than impressive, adding a fire to the already intense lyrics. But badcandy is not just limited to their studio. 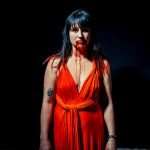 The three year anniversary of the band’s first show was on June 15th, which the band happily posted about. Performing live, badcandy adorns themselves in fake blood, interesting costumes and an attitude that gets your little indie heart beating. During their first show, Subak was dressed in a red dress, her mouth covered in blood with angel wings tacked to her back. You can also find them sporting DC villain attire such as the Joker, Poison Ivy and Bane during their first show anniversary post.

But despite their fierce sound and bloody costumes, the band members of badcandy love to laugh with each other as well as support other artists. They have a kind-hearted hashtag called “#badcandycrush” where they post about new or local musicians every Friday on their Instagram. Not only do they hype up their fellow rock bands, they don’t hesitate to support bands and lyricists of all genres. Not only does this give the band more attention through the Instagram algorithm, it gives light to other artists that might have slipped under the radar.

You can admire the stunning vocals while also head banging to the songs at full blast. It’s still unknown when their full album will come out, but the singles that have been released are stoking the fire of a raw, emotional, first album and many to follow.