Something Great and Wonderful – Celebrating 30 Years of Lollapalooza

Something Great and Wonderful – Celebrating 30 Years of Lollapalooza

While Lollapalooza has not (consistently) been happening each year for 30 years, in 1991 the monumental festival known as Lollapalooza began. Initially reported by founder, Perry Farrell that he heard the word Lollapalooza used in a Three Stooges episode or movie, but as Chicago Tribune reported in 2011, “no one has actually come up with a source.” In a 2019 video posted on the Lollapalooza Youtube page, Farrell states that “Lollapalooza began as a search through the dictionary.” and it means, “something, or someone great and or wonderful.”

After all these years, the ‘how’ is not as important as the ‘why’ but the vision that he had then, pretty much stayed consistent by fusing music, green initiatives, non-profits, art, and lifestyles all together under one festival.

Lollapalooza has always been highly immersive and a place for positivity by allowing people to get involved with organizations that help to make the world a better place, and it has always been up to the individual on how involved they wanted to be.

For example, this year Lollapalooza has partnered with REVERB, a non-profit from Portland, Maine who “provides comprehensive, custom greening programs for music tours, festivals, and venues while conducting grassroots outreach and education with fans around the globe.” You’ll see their wonderful volunteers hydrating Lollapalooza fans, helping fans to earn exclusive Lollapalooza swag by filling recycling bags to keep Chicago clean and assisting fans to throw their waste in the proper receptacles. All of these efforts made by their volunteers are SO IMPORTANT in having the best “Lollapalooza experience”.

And for the fifth time, the LOVE HOPE STRENGTH FOUNDATION returns by providing ambassadors to help fans ‘get on the list’ as potential marrow donors through their Get On The List campaign. Their mission, “Saving Lives, One Concert at a Time” and in fact, “Lollapalooza ranks in the top four festivals in the country for the number of potentially live-saving matches where Love Hope Strength Foundation has had a presence.”

Another way Lollapalooza has helped to save lives is by offering free tickets to Chicago residents who got vaccinated on their designated Lolla Day and by also ensuring that all attendees either have a legitimate printed copy of their vaccination card or a negative COVID-19 test. Those unvaccinated are encouraged to wear a mask while onsite to help keep everyone safe. If you have questions about the health policy, you can read about it here 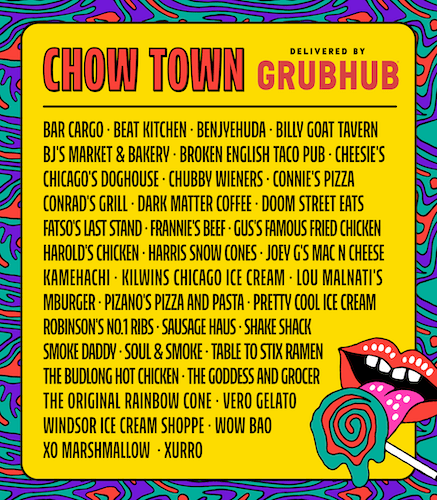 Everyone’s gotta eat, right? Of course they do and Lollapalooza has you covered as always, this year delivered by Grubhub. Chow Town has always had some of the best vendors around and some favorites have been, Wow Bao‘s, and Lou Malnati‘s, but take a look at this year’s list and give them a try while you’re there and let us know your favorite vendors.

But of course, what it all comes down to is the fact that Lollapalooza is best known for all the great live music that everyone has come to love and enjoy almost each and every year. The types of artists have changed slightly over the years, but still people come from all across the globe to experience four days of absolute bliss that only Lollapalooza can deliver.

Check out an MTV Rockumentary on Lollapalooza here and see how it all started!

Everyone’s ideas on the best Lollapalooza artists and the best years of Lollapalooza are always going to differ, but the keyword here is “best” and Lollapalooza brings you the best festival experiences overall. Here are a few of the top moments from fans that were shared with us, click to watch them here:

Take a look at what the Lollapalooza experience is like right here:

And when Lollapalooza ends for the evening, is that all?? HELL NO, that is definitely not all..! The music continues with the official Lollapalooza aftershows at participating venues throughout the city and many of them sell out shortly after they’re announced. But take a look at the schedule here, some of them may not be sold out yet and hopefully you’ll be able to see your favorite artists!

Even now, putting all this together in some concise way, almost 30 years of phenomenal musical moments and what it all means, and how it pulls everything together through the power of music; it really is impossible. The legacy festival of positivity that Perry Farrell built just keeps getting stronger year after year!

If you haven’t experienced Lollapalooza yet, tickets are still available here, and the weather is (so far) looking like it is going to be great, so don’t miss the experience of a lifetime!