A Haunting Halloween with Susie Blue and the Lonesome Fellas

A Haunting Halloween with Susie Blue and the Lonesome Fellas

Want to get into the holiday SPIRIT?  Chicago’s Susie Blue & the Lonesome Fellas are getting SCARY for Halloween!

Check out their special brand of  spooky,  bluesy rockabilly songs –

“Drivin’ Nails in My Coffin” from their recent release “Bye Bye Blues” which features Chicago harmonica maestro Howard Levy, which features a fun video of Susie in a coffin at the graveyard! 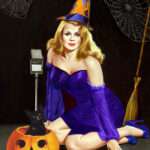 Susie Blue aka vocalist Solitaire Miles started out singing Jazz  with greats like Von Freeman, Johnny Frigo,  Doc Cheatham and Willie Pickens, but as she’s matured she has embraced a bluesy style with a Billie Holiday flair which has inspired DownBeat Magazine and the Wall Street Journal to compare her to Holiday,  with DownBeat saying “Miles brings to mind a winning blend of Patsy Cline & Billie Holiday.”  The band re-creates Halloween classics from the vaults of Screamin’ Jay, Kay Starr and Ernest Tubb, accompanied by a first class band including Howard Levy, Neal Alger, Eric Schneider and more.  So get ready for some Chicago-style Bluesy Halloween Classics played by the best musicians in town!

Susie Blue and the Lonesome Fellas: